AUS Vs IND, 3rd Test: Ravindra Jadeja Calls His Direct Hit To Run Steve Smith Out 'Best Ever' - Watch It

Regarded as one of the best fielders in the world, Ravindra Jadeja once again showed his ability on Day 2 of the third Test between Australia and India in Sydney 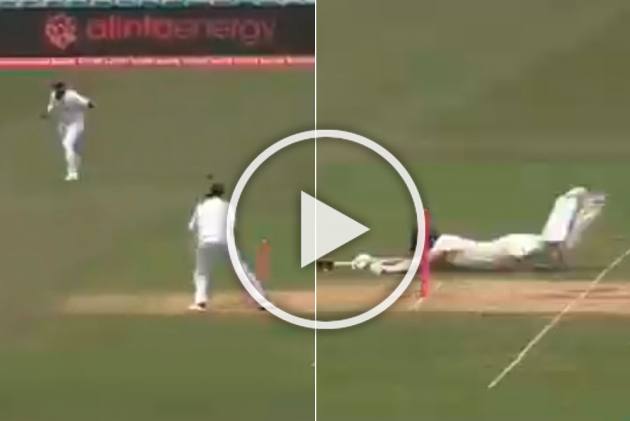 A fascinating day of Test cricket on Day 3 at Sydney Cricket Ground was marked by individual brilliance with Australia and India sharing the honours Friday.

Resuming on their overnight score of 166/2, Aussies were looking at a massive first innings total with Marnus Labuschangne (91) and Steve Smith (131) adding another 100-run stand. Labuchasgne failed to reach a deserved hundred by Smith was at his imperious best, and scored his 27th Test ton. Indian bowlers were at a loss.

And it needed a sensational fielding effort from Ravindra Jadeja to end Smith's 226-ball knock.

In the 106th over, Smith played the fourth ball to the vacant backward area but Jadeja ran from square leg and hit the stumps at the striker's end with a direct throw even as the Aussies jostled for a second run.

Later, Jadeja called the effort his "best ever", saying he can watch it any number of times.

"I will rewind and play this run-out as this is my best effort. A direct hit from outside the 30-yard circle and that's like a moment that gives you that satisfaction," Jadeja said. "Three or four wicket hauls are fine but this run-out will stay with me."

Jadeja has been a live wire on the field during this tour with some fantastic catches like the one he took running backward at the MCG to dismiss Matthew Wade or this run-out at a crucial juncture when Smith could have added an extra 25 to 30 runs.

The wicket meant that the Aussie innings folded for 338 all out, from a very good position. They were once 206/3.

And the wrecker in chief was Jadeja, who took four wickets for figures of 4/62. In fact, effectively, with that direct hit, it was a fifer.

The bails were drawn on the third day with India on 96/2 with Cheteshwar Pujara (9) and Ajinkya Rahane (5) unbeaten.

Australia won the series opener by eight wickets in Adelaide, then Indian hit back to level the Border-Gavaskar Trophy series 1-1. The fourth and final match is scheduled to be played in Brisbane.