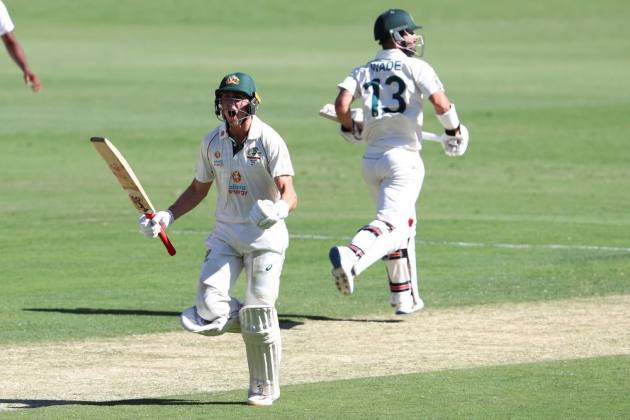 A fifth Test hundred in his kitty against a "very disciplined" bowling attack but Australia's Marnus Labuschagne was still a disappointed man on the opening day of the fourth Test against India here as the knock was not "big" enough for him.

"...I think, I am definitely disappointed not going on and getting a really big score, which would have put us in a better position as a team," Labuschagne said at the virtual post-play press-conference.

"Any Test century, it doesn't matter who it is against or against what opposition, you want to make sure you are scoring hundreds and probably for me (it was) today it was disappointing that (I) did not end up making that a really big hundred," he stressed.

However, he credited the Indian bowlers for being disciplined early on and hardly giving away any scoring opportunities.

"They were disciplined early and did not give us many of those scoring opportunities in the first session," the right-handed batsman said.

He said he worked to his plan, which was to tire out the bowlers and then pick scoring chances.

"I think when you are playing really good teams, it doesn't matter who comes in, everyone in that line-up is very disciplined, they understand their role, you know they are very skilled bowlers.

"So, it was sort of a matter of discipline early on, specially in the first session and half, making sure you get yourself in, you get pace of the wicket. So that you can really cash in when the bowlers are little-bit tired and there are a bit cooked,” he added.

Labuschagne was facing a relatively new Indian attack and he conceded that he had to make some plans on the run.

"I think that is a part of the game, that is really enjoyable, you got to read the situation out there. Definitely made some plans on the run today," he said.

Labuschagne also said that India's decision to go with an extra bowler "probably paid off for them" after speedster Navdeen Saini had to leave the field because of a groin injury.

He also credited all-rounder Cameron Green (28 not out) and skipper Tim Paine (38 not out) for holding fort till the end after Australia lost two quick wickets in the final session.

Labuschagne shared a 70-run third wicket stand with Steve Smith, who made a 77-ball 36, and he said that the off-field controversies don't really concern the star when he comes out to bat.

Smith was criticised by fans on social media and a few former cricketers for scuffing up Rishabh Pant's guard on the final day of the Sydney Test, which ended in a draw, a charge termed ludicrous by head coach Justin Langer.

"...that stuff doesn't really concern him, he is focussing on the ball and scoring runs. If anything, it gives him extra motivation to put big runs on the board, so I don't think that (outside) stuff comes into play when he is actually out there (in the middle) at all," he signed off.