Marnus Labuschagne (108) helped Australia to 274-5 at stumps on day one at the Gabba, where they are unbeaten in their past 31 Tests 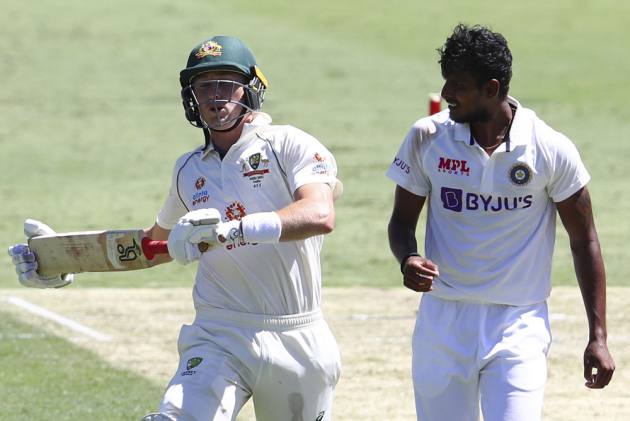 Marnus Labuschagne notched his fifth Test century on an even opening day of the fourth Test between Australia and India in Brisbane.

Labuschagne (108) helped Australia to 274-5 at stumps on day one at the Gabba, where they are unbeaten in their past 31 Tests, on Friday.

The right-hander was dropped twice and punished India, who continued to fight despite their injury woes.

But Matthew Wade (45) and Tim Paine (38 not out) were Australia's next two top scorers, several poor dismissals costing the hosts after they elected to bat first on a warm day, with the captain and Cameron Green (28 not out) unbeaten at stumps.

Thangarasu Natarajan (2-63) and Washington Sundar (1-63) made their Test debuts for India, who were without Ravichandran Ashwin, Ravindra Jadeja, Jasprit Bumrah and Hanuma Vihari from the drawn third Test.

Adding to India's worries, Navdeep Saini (0-21) was sent for scans on a suspected groin injury.

After winning the toss, Australia quickly found themselves 17-2 in a poor start in their bid to win a series that is locked at 1-1.

Rohit Sharma took a great low catch diving to his right from first slip to remove David Warner (1) off Mohammed Siraj (1-51), while Marcus Harris (5) handed Shardul Thakur (1-67) his first Test wicket with a flick straight to Sundar at square leg.

Steve Smith (36) and Labuschagne steadied the innings with a 70-run partnership before the former departed after lunch, caught by Rohit at short midwicket off Sundar.

Labuschagne was given two lives – on 37 and 48 – and he made India pay alongside Wade as Australia looked set to take control of the Test.

Since Labuschagne made his Test debut in October 2018, only New Zealand star Kane Williamson (six) has made more centuries than his five.

But Wade and Labuschagne skied deliveries from Natarajan with pull shots to give India a way back into the Test as Australia were left at 213-5.

Paine and Green were relatively comfortable before the latter was dropped on 19, Thakur spilling a tough return chance, and they got to stumps ahead of an important day two.