Cheteshwar Pujara also survived a very close call against Nathan Lyon with the Aussies going for a review for LBW. And there were talks of the Indian batsman not offering a shot 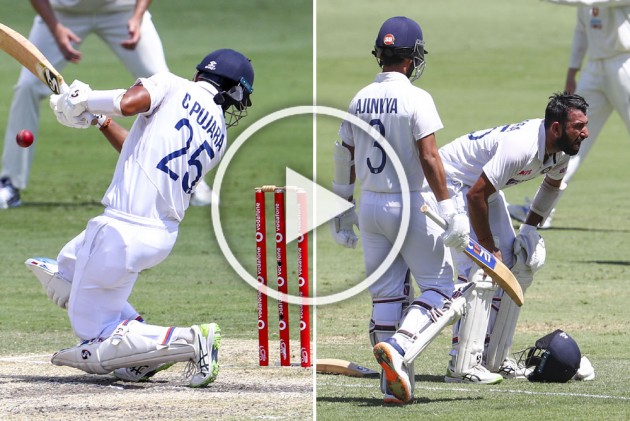 The final day's play of the Border-Gavaskar Trophy series-deciding fourth Test between Australia and India was stopped for a while after a vicious bouncer from Pat Cummins hit Cheteshwar Pujara on the head.

Pujara, 32, tried to duck the fifth ball of the 33rd over, but the ball clipped the back of his helmet. The right-handed batsman needed a checkup from the team physio.

Pujara is getting checked by the doctor after this Cummins delivery got him in the back of the helmet #AUSvIND pic.twitter.com/37bSIFbDGZ

Pujara continued batting after the mandatory concussion protocol test as India chase a 328-run target for an improbable win at The Gabba, Brisbane.

Then, there were more blows:

Pujara cops another ball on the arm.

Ouch! Pujara rips his glove off after copping one flush on the glove!

Earlier, Pujara survived a very close call against Nathan Lyon with the Aussies going for a review for LBW. And there were talks of Pujara not offering a shot.

It doesn't get much closer than that!

India lost opener Rohit Sharma early for seven runs in the ninth over to Cummins. Since then, Shubman Gill has hit a half-century. And India were 83/1 (38) at Lunch, still needing 245 more runs to win the series 2-1.