Marnus Labuschagne (67 not out), Will Pucovski (62) and Steve Smith (unbeaten 31) capitalised on good batting conditions at the SCG 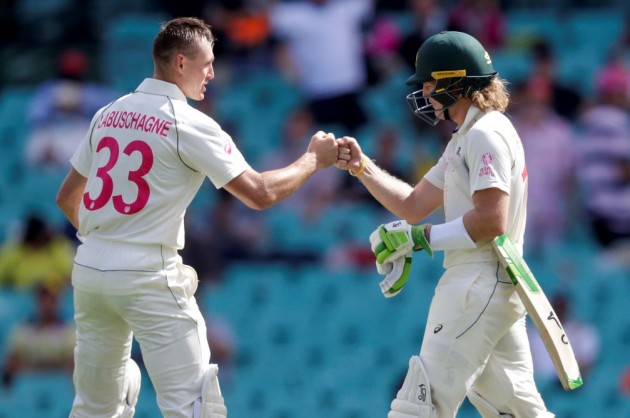 Australia made a strong start to the third Test against India on a rain-hit opening day in Sydney. SCORECARD | NEWS |HIGHLIGHTS

Marnus Labuschagne (67 not out), Will Pucovski (62) and Steve Smith (unbeaten 31) capitalised on good batting conditions at the SCG on Thursday as Australia finished at 166-2 at stumps.

There were just 55 overs bowled after a rain delay of almost four hours, but Australia look set to make the most of Tim Paine winning the toss and opting to bat.

Pucovski had some luck on debut as David Warner (5) fell cheaply, while Smith was aggressive alongside Labuschagne in a key encounter with the series locked at 1-1.

Despite wickets for debutant Navdeep Saini (1-32) and Mohammed Siraj (1-46), India were left to rue two dropped catches by Rishabh Pant.

Warner looked below full fitness in his return from an adductor injury, the left-hander caught for five after chasing a Siraj delivery and edging to Cheteshwar Pujara at first slip.

The rain delay of almost four hours followed, and Ravichandran Ashwin (0-56) slowed Pucovski and Labuschagne down after he was introduced following the delay.

The off-spinner should have had the wicket of Pucovski on 26, but wicketkeeper Pant put down the chance.

Pucovski was given another life on 32, the opener gloving a well-directed Siraj bouncer, but replays showed Pant dropped the catch on the second attempt.

A rollercoaster of emotions for Will Pucovski! Initially given out, but on closer inspection he's recalled to the crease! #OhWhatAFeeling@Toyota_Aus | #AUSvIND pic.twitter.com/WgT5lCRjAE

The 22-year-old became the youngest Australian to score a half-century when making their Test debut at the SCG, but his luck soon ran out.

The Australia opener departed on 62, trapped lbw by Saini, a fellow debutant.

Smith, who made just 10 runs in the opening two Tests, came out with intent, his 50-run partnership with Labuschagne coming off just 80 balls.

India had few answers to finish the day, Australia in a position to build with better weather forecast for the rest of the Test.