Hit by a barrage of injuries through the series, India picked debutants Washington (3/89) and medium pacer T Natarajan (3/78) in the playing eleven on Friday. 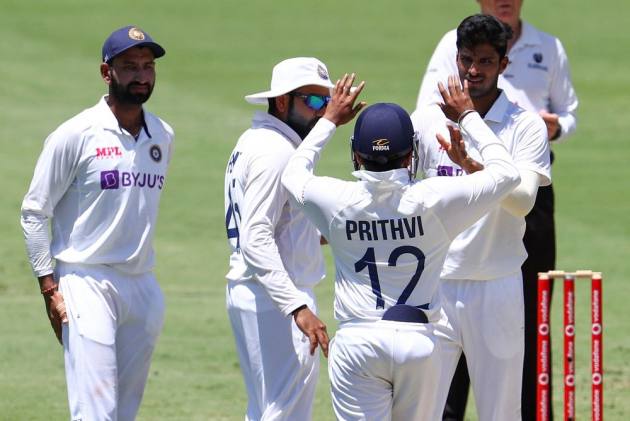 Hit by a barrage of injuries through the series, India picked debutants Washington (3/89) and medium pacer T Natarajan (3/78) in the playing eleven on Friday.

The duo was travelling with the squad as net bowlers.

"I thought they (the Indian bowlers) were very consistent. I thought Washington Sundar in particular was disciplined and fill that role of Ravi Ashwin quite well and kept it tight and was able to take some key wickets on the way,” McDonald said at the virtual post-day press conference after day two.

"So, for me I suppose, he is a bowler who controlled well the tempo of the game and I think it stood out for me."

McDonald, who also coaches in the IPL, was also impressed by Natarajan.

"...Natarajan shaped the ball early, there is lot (to like) about him, left-arm swing bowler, no doubt he is inexperienced but has enough played first-class games to be play his first Test on this tour, (that) is a great achievement, so I think they held their own” the 39-year-old said.

The left-arm pacer had impressed in the limited overs leg of the tour after making the Indian team at the back of a stellar IPL.

Australia were bowled out for 369 in the first session of the rain-curtailed second day. Like Washington and Natarajan, Shardul Thakur also took three wickets..

"They (Indian bowlers) applied pressure throughout the innings and they made (it) difficult for ourselves. Times when we felt we would get on the top, they were able to bounce back and get key wickets at crucial times. It was great arm-wrestle, so full credit to their attack," the Australian assistant coach said.

He also said that Indian bowlers and his batting group “have a big job” ahead of them in the second innings.

India in reply were poised at 62/2 in the first innings with Ajinkya Rahane and Cheteshwar Pujara remaining unbeaten on 2 and 8 respectively, at the end of the day’s play with the visitors still trailing by 307 runs.

According to McDonald, the dismissal of Rohit Sharma was quite handy even as he termed the proceedings so far as "even".

"India 2/60, to get (Rohit) Sharma just before the or what was to be the end of the play was very handy. But we had 100 runs today, could that have been more possibly, but in saying that 350 plus at the first innings at the GABBA is not a bad score."

Australia have not lost a Test at the Gabba since 1988.

The assistant coach said that his team was always looking to put up a total beyond 350 in the first essay.

"...but there is lot of cricket to be played in this and will define the pretty much the series, one all coming in and all on the line. The overall performance of the series will be defined by the series, no doubt about that,” he added.

The day’s play was suspended early due to rain and he said that it was disappointing for the spectators.

"The umpires have made that call (about play being called off) but no doubt disappointing for the spectators, who stayed on. It would have been nice to get some play there, but clearly deemed by the umpires to be unsafe.

"I suppose the playing surface is unsafe in some areas," he added.