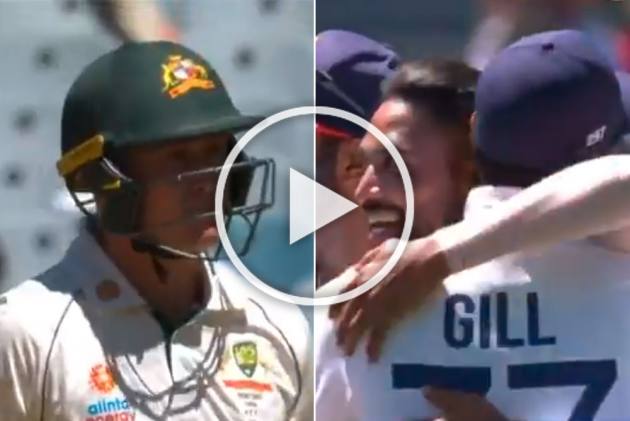 Debutant Mohammed Siraj removed a well-set Marnus Labuschagne as India made further inroads leaving Australia reeling at 136 for 5 at tea on the first day of the second Boxing Day Test at Melbourne Cricket Ground on Saturday.

Their resistance was finally broken in the 42nd over when became Bumrah's second victim of the day, caught by skipper Ajinkya Rahane a gully as the batsman poked at a short ball outside off stump.

Introduced into the attack just after lunch, debutant Siraj proved to be a tad expensive, giving away 24 runs off six overs in his first spell.

But the pacer was lucky with his maiden scalp when a delivery that was drifting down the leg-side was glanced by Labuschagne to the other debutant Shubman Gill stationed at backward square leg. Gill took it inches off the ground.

His innings had for boundaries.

At the final break of the day, skipper Tim Paine was batting on nought in the company of Cameroon Green (6).

Earlier, senior off-spinner Ravichandran Ashwin's double strike including that of Steve Smith was the highlight of the first session.

Skipper Rahane made some impressive captaincy moves which enabled India gain the upper-hand on a track that offered turn and bounce on the first session of a Test match.

Bumrah struck for the visitors in the fifth over, removing Joe Burns for a duck as the batsman nicked a delivery that just moved a bit after hitting the seam to Rishabh Pant behind the stumps.

Introduced into the attack in the 11th over, Ashwin struck in his second over when Matthew Wade (30 off 39) went for a glory shot over square-leg, only to get a top-edge and Jadeja holding on to the catch despite a collision with an onrushing debutant Shubman Gill.

An over later, Ashwin was again on the money, this time accounting for the big fish Smith (0) as he got one that was tossed and the former skipper tried to glance one only to find new vice-captain Cheteshwar Pujara pouch it at leg gully.

Labuschagne did hit some good shots before the break but also looked a bit edgy in between. He survived a leg before decision when Ashwin trapped him with flight but the Umpires Review showed that the ball was missing the stumps.