On a bouncy and turning Melbourne Cricket Ground pitch, Ravichandran Ashwin rocked the Australians, getting the wickets of Matthew Wade and Steve Smith 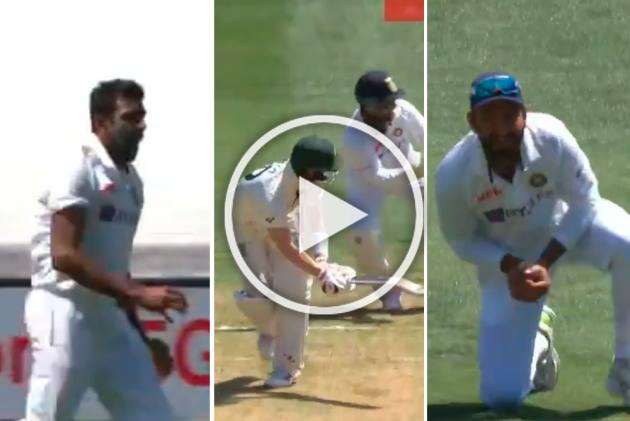 Australia vs India Boxing Day Test at the iconic Melbourne Cricket Ground marked 10 years since Steve Smith's first – and the Australia batsman has made the occasion his own. But on Saturday, the former Australia captain found his match in Indian spinner Ravichandran Ashwin.

After winning the toss, Aussie captain Tim Paine opted to bat. But the hosts found themselves two down inside the 13th over with Jasprit Bumrah and Ashwin taking the wickets of openers Joe Burns and Matthew Wade respectively. And it brought Smith to the centre.

Ajinkya Rahane, standing in for absent skipper Virat Kohli, produced a masterclass by keeping close-in fielders against the fidgety Smith, and it worked.

In the fifteen over, Smith tried to negotiate the third ball but ended up offering a catch to Cheteshwar Pujara at leg slip, and India's new deputy completed the rite with a fine catch. And an eight-ball duck for the imperious Smith. For the record, this was the first time that Smith had been dismissed in Test cricket for a duck since 2016 in Perth.

The Aussie departs for a duck ðÂÂÂÂÂÂÂÂÂÂÂÂ

The New South Welshman played his first Boxing Day Test 10 years ago in what was an Ashes catastrophe for Australia. Smith made scores of six and 38 in that match, and just 19 against England three years later, but he has enjoyed the MCG since then.

He entered the second Test of the Border-Gavaskar Trophy series with an average of 113.5 in Melbourne – comfortably his best at any ground at which he has played at least five matches – including four centuries and three fifties. Smith is 92 runs away from becoming the eighth Australian to make 1,000 Test runs at the MCG, and of those currently on that list, only Don Bradman (128.53) has a better average.

"I think my Boxing Day record is probably my best in Australia of all the grounds. I like batting at the MCG, those sorts of big occasions," Smith said ahead of the Test. "I like to try and make the most of them and help the team out so there's nothing like the thrill. You get the shivers down your spine when you walk out to bat on Boxing Day, the crowd yelling and it's a dream come true in a way."

But it was not to be.