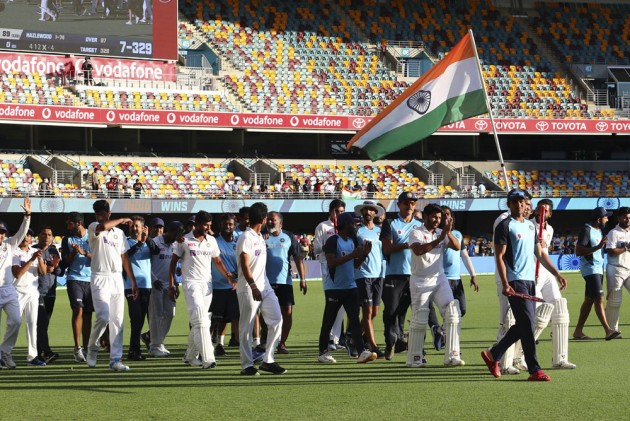 An Indian cricket team saddled with broken bones and battered bodies showed a never-seen-before zeal to retain the coveted Border-Gavaskar Trophy with a historic three-wicket win over Australia in the fourth and final Test here, successfully chasing a 328-run target to seal the four-match series 2-1.

A minefield of talent called Rishabh Pant (89 not out off 138 balls) channelled his inner 'Mad Max' to scare the daylights out of the Australians with his breathtaking strokeplay, ending the home team's 32-year-old unbeaten run at the 'Fortress Gabba'.

The result has the potential to end Tim Paine's reign as Australia captain having lost back-to-back home series against India.

The highlights package of Pant's battle with Nathan Lyon can be enjoyed repeatedly in times to come as he demolished the 100-Test man in company of debutant Washington Sundar (22), who hooked the world's best fast bowler, Pat Cummins, for a six.

No one moved from their seats as Pant cut, drove, and paddle-swept to make a statement to his detractors while gifting India one of their finest overseas wins during the dying moments of the final session with an off-driven boundary.

While Shubman Gill (91 off 146 balls) announced his arrival on the global stage, Cheteshwar Pujara (56 off 211 balls) surpassed all the pain barriers en route his slowest Test fifty that held the game in balance for Pant to launch a final assault.

The Australian team wouldn't feel too good about not being able to win a Test match with an opposition that was finding it difficult to field a fit first XI a day prior to the Test match.

The series will be remembered for ages and the impact that Ajinkya Rahane's team had on the cricketing fraternity and the fans in general will be written in golden words when a fresh history of Test cricket after 2000 is written.

In terms of relevance, a series win without Virat Kohli, Mohammed Shami, Ravindra Jadeja, Ravichandran Ashwin and Jasprit Bumrah not being available at various points, is zillion times more significant than the 2-1 win in 2018-19 when the opposition didn't have Steve Smith and David Warner in its ranks.

The stands were near-about empty at the Gabba thanks to the COVID-19 crowd restrictions but make no mistake that Test cricket seemed well and truly alive and kicking.

With its beautiful ebbs and flows, the fifth day was witness to three separate schools of batsmanship, so very dissimilar to each other.

Gill, who is now going to be the "Real Deal", was free-flowing in his stroke-making with his "beside the line of the ball" technique as he rode the bounce to hammer home the advantage and briefly make India favourites to win the battle.

The two sixes off Mitchell Starc -- a slash over backward point and a thump over deep mid-wicket -- will be the ones for the keeps.

The disdain while thrashing the Australian bowlers would have made even Sachin Tendulkar and Virat Kohli proud.

India have now got Kohli's heir apparent and the 21-year-old is here to stay for the longest time.

Pujara, on the other hand, saw the Australian try out the menacing short ball tactic. He took a few on the helmet, a few more on the chest and other parts and a painful one on the knuckles but remained unfazed.

Gill and Pujara showed that there are multiple ways to skin a cat.

If Pujara was ready to duck, sway and cop body blows off Josh Hazlewood and Cummins, showing the art of survival, Gill, on his first tour of Australia, was ready to be the intimidator by bringing the pull shot out of his repertoire.

The duo, during its 114-run stand, showed that very contrasting styles can co-exist without conflict even as fans of both genres argue who has the more appropriate approach for the format.

Even Pant with his cavalier ways would have added his two cents to the debate on various styles.

But for the uninitiated, the three distinct schools can be suitably de-constructed -- Pujara's was more of investing in an LIC policy with safe returns while Gill's approach, with his collars-up, was akin to mutual funds and Pant would most likely play his game in high-stakes stock market where winner takes it all but at times at a heavy price.

While the final day performance is sure to hold a special place but the story of this match won't be complete without a more than honourable mention of what Shardul Thakur and Washington Sundar did on the third morning and afternoon.

Had that partnership not been there, it wouldn't have been as easy for India as it seemed in the end.

Thakur and Washington gave hope of a fight, Pujara, Gill and Pant, with their performances, honoured that fight.

Coach Ravi Shastri was once panned for his "best travelling Indian team" comment but after January 19, very few would disagree that this is the "toughest Indian team on road".