As India get ready for their maiden away Day-night Test against Australia, Kuldeep Yadav shares his thoughts on their historic win in 2018-19 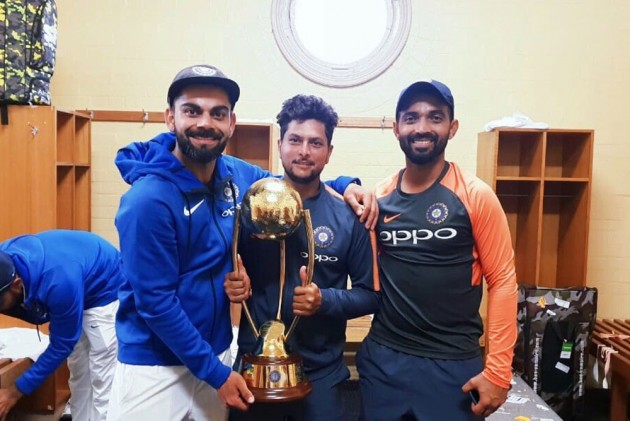 Kuldeep Yadav has slammed the insinuation that India's first-ever Test series win in Australia during their last tour Down Under was made easy by the absence of Steve Smith and David Warner.

Talking to Indian Premier League (IPL) franchise, Kolkata Knight Riders (KKR), the left-arm spinner said that "a Test series can never be won by luck" as India continue their preparation for their first-ever away pink-ball match.

“You need to win Test matches to win a series. We won two of them, and could have one [won] the fourth one too had there been no rain. The criticism holds no merit. Whenever you are playing against a team, your own team’s performance matters the most," the 25-year-old said.

The KKR player will be fighting for a spot in India's XI against fellow spinners Ravindra Jadeja and Ravichandran Ashwin.

"So instead of looking at the other team - who they have in their squad, and who they don’t - it makes more sense to talk about your own team. We did well, and hence we won the Test series. If our fast bowling works well and we perform as prolifically with the bat as we did the last time, we will win this time too,” Yadav told KKR.

Under Virat Kohli, India had claimed a 2-1 victory in the four-match Border-Gavaskar Trophy series in 2018-19. Then, the Aussies were going through a rebuilding process in the aftermath of the ball-tampering scandal in South Africa, which rocked the sporting world. And many claimed that India's win against their depleted opponents was more to do with 'luck' than merit.

While admitting that the return of Smith and Warner have certainly made the Aussies strong outfit, Yadav added that the hosts have other stars who have "really done well for them in recent times" and in the last series against India, the hosts were "good".

Kuldeep has so far played six Test matches, including two against the Aussies in his dream debut in Dharamsala (4/7 in 2017) and in Sydney (2019).

The Test series opener, a day-nighter in Adelaide, starts on Thursday (December 17), 2020.