AUS Vs IND: Play Disrupted After India Players Complain Of Abuse From Crowd

It was a day after a drunk spectator at the SCG allegedly directed racial abuse at Indian players Jasprit Bumrah and Mohammed Siraj. 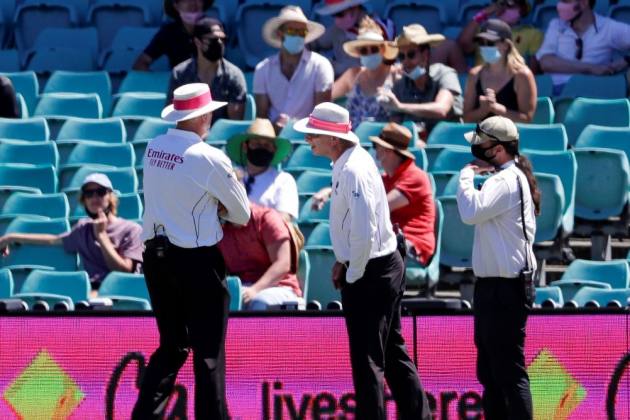 Play was halted for a few minutes on the fourth day of the third Test between India and Australia after Mohammed Siraj  complained of abuse from the crowd at the Sydney Cricket Ground here on Sunday.  Live Updates | Live Scorecard | News

It was a day after a drunk spectator at the SCG allegedly directed racial abuse at Indian players Jasprit Bumrah and Mohammed Siraj. The BCCI has lodged a complaint with the ICC.

India skipper Ajinkya Rahane quickly approached the umpires who has a long discussion with the ground security. Six spectators were ejected from the ground.

Play stopped at the SCG for more an eight minutes after allegations of abuse from the crowd #AUSvIND https://t.co/lae1ODNmwF

Meanwhile, Cricket Australia reaffirmed its zero-tolerance policy towards discriminatory behaviour in all forms following the alleged racial abuse of members of the Indian cricket squad.

Sean Carroll, Cricket Australia’s Head of Integrity and Security, said anyone who sought to vilify or harass had no place in Australian cricket.

“Cricket Australia condemns in the strongest terms possible all discriminatory behaviour,” Carroll said. “If you engage in racist abuse, you are not welcome in Australian cricket, he added.

During the second session of the fourth day on Sunday, India players huddled in the centre after Siraj, standing at the square leg boundary, complained of abuse after being hit for two consecutive sixes by Cameron Green in his over.

This prompted the security personnel to enter the stands and look for the mischief monger before a group of people was asked to leave the stands.

The umpires also intervened and were seen chatting with the players. No objects were directed at the players though.

“CA is awaiting the outcome of the International Cricket Council’s investigation into the matter reported at the SCG on Saturday. Once those responsible are identified, CA will take the strongest measures possible under our Anti-Harassment Code, including lengthy bans, further sanctions and referral to NSW Police," Carroll said, adding, "As series hosts, we unreservedly apologise to our friends in the Indian cricket team and assure them we will prosecute the matter to its fullest extent.”