With Rahane going strong, India took a lead of 82 runs and Gill said the team will look to capitalise on it as batting will get more challenging from Day 3 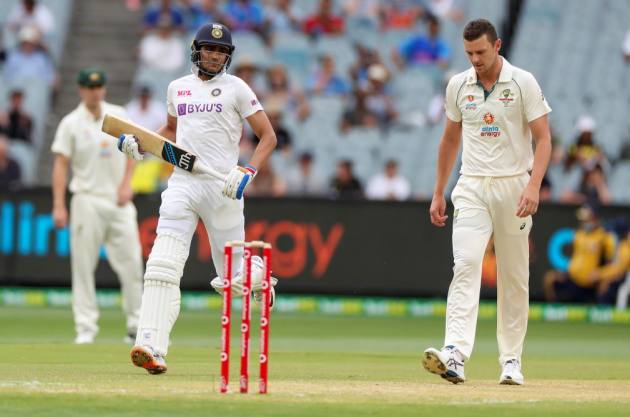 Young India batsman Shubman Gill says watching Ajinkya Rahane's "magnificent" hundred from the sidelines was immensely educative for him and he learnt how not to get into a shell while facing a lethal bowling attack. Highlights Day 2 | Scorecard | News

Stand-in skipper Rahane scored an unbeaten 104 in tough conditions to steer India to 277 for five against Australia on the second day of the second Test here.

"This knock was all about patience, more importantly when you are playing such a high quality pace attack, sometimes you get into shell and not able to score runs, and the way Ajinkya bhai played, it was such a magnificent knock to watch from outside," Gill said during a virtual press conference.

"How to see off those tough periods, he made it sure that he put the loose balls away."

With Rahane going strong, India took a lead of 82 runs and Gill said the team will look to capitalise on it as batting will get more challenging from day three.

"On the first day, there was a bit turn for (Ravichandran Ashwin) Ash bhai and (Ravindra Jadeja) Jaddu bhai and even today we saw there was turn for Nathan (Lyon) and as the time goes on there will be more cracks and it will be more challenging for the batsmen.

"So it is important to capitalise on this lead that we have and get them all out as quickly as possible."

Opening the innings, Gill scored a 65-ball 45 on debut before he nicked an outswinger from Pat Cummins.

"When I came into bat, there was something in the pitch, it was lively but the only thing I told myself was that no matter what was in pitch, I should be able to play my game," the 21-year-old said.

"... I should be able to give my team a start as an opener, that was the ideal situation and that was my hope.

"Overall I wanted to play with intent and build partnership which I did to some extent but I am not satisfied the way I got out, it was last ball of Cummins' spell and it was a loose shot."

Gill said facing a high quality Indian attack at the nets while being with the team was a confidence booster and it put him at ease when he faced the first ball of his Test career.

"I have been travelling with the team for the last 4-5 Test series, it has helped me a lot," said the Punjab batsman.

"I have been able to settle in the team and to be able to play someone like Bumrah or (Mohammed) Shami bhai or Umesh bhai at the nets, it is a huge confident booster for a youngster. And when I went into bat today I didn't feel like I am in a whole new place."

Asked if he sees himself as an opener in the Indian team, Gill said: "I don't have any certain plan, where ever team wants me to bat, I am happy to bat."

Ravindra Jadeja added an unbeaten 104 runs with Rahane after coming into bat at 173 for 5.

"It was really good knock. It could be very easy to lose wickets and let the opposition back into the game and the partnership between them was really important," Gill said.

Gill said ahead of his debut he had a chat with head coach Ravi Shastri and batting coach Vikram Rathour which helped.

"... I had certain plans and certain expectations from myself. Before coming into this match I was talking with our batting coach and our head coach Ravi sir and we were talking about how I should approach the match," he said.