Thangarasu Natarajan has been sensational since making his international debut in the third ODI at Canberra, snapping eight wickets in four matches 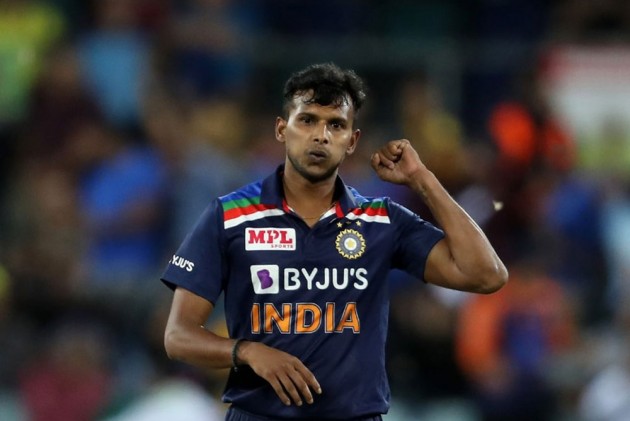 Impressed by newcomer T Natarajan's ability to deliver under pressure, India captain Virat Kohli on Tuesday said the seamer could be a great asset for the team heading into next year's T20 World Cup.

The 29-year-old from Tamil Nadu has been sensational since making his international debut in the third ODI at Canberra, snapping eight wickets in four matches.

"Special mention for Natranjan, in the absence of (Mohammed) Shami and Jasprit (Bumrah), he stood out and really delivered under pressure," Kohli said at the post-match press conference.

"It is outstanding because he is playing his first few games at international level. He looks very composed, he is a humble and hard working guy, he is sure of what he is doing."

India is scheduled to host the T20 World Cup in October and November next year.

"I hope he continues to keep working hard on his game and gets better because a left- arm bowler is an asset for any team and if he can keep bowling in this way consistently, it will be a great thing for us heading into the World Cup next year," Kohli said.

India lost the third T20I by 12 runs but claimed the series 2-1, and Kohli said he was impressed with the way the team never gave up despite missing experienced players such as Rohit Sharma, Bumrah and Shami.

"We played good cricket over last 11-12 T20s, the fact that this squad had players that don't have much exposure in international cricket, from that point of view it was a nice performance especially after losing first two ODIs. We came back nicely and showed belief."

"We carried the momentum, fighting back again in the first T20s and even tonight game was close, so the standout is that guys are not giving up."

India is next playing the much-anticipated four-Test series against Australia from December 17 and Kohli said he is in a "good headspace" heading into the opening Day-Night game in Adelaide.

"Tonight I felt particularly good, I am in right headspace, it was scratchy to begin with in first ODI, I worked on few aspects of my game, purely trying to get into best head space, not much about technique.

"I think when I get into good headspace, I can switch to formats and adjust to conditions," he said.

"I feel very balanced and good going into the Test series, it is about continuing to be in that headspace and making sure I contribute enough to the team success and hopefully we will start on the right note in the Test series."

Talking about the workload management of the players, the India skipper said: "It is important to understand that you need guys fresh for first test, we need to take calls along with we playing six games in no time, this is something we need to address and be wary off.

"We don't want guys sore or have too many miles in them, we keep talking to the bowlers, they have been very professional and good in communicating.

"We need to show faith and trust in the process and make sure they are in right headspace heading into the first Test."