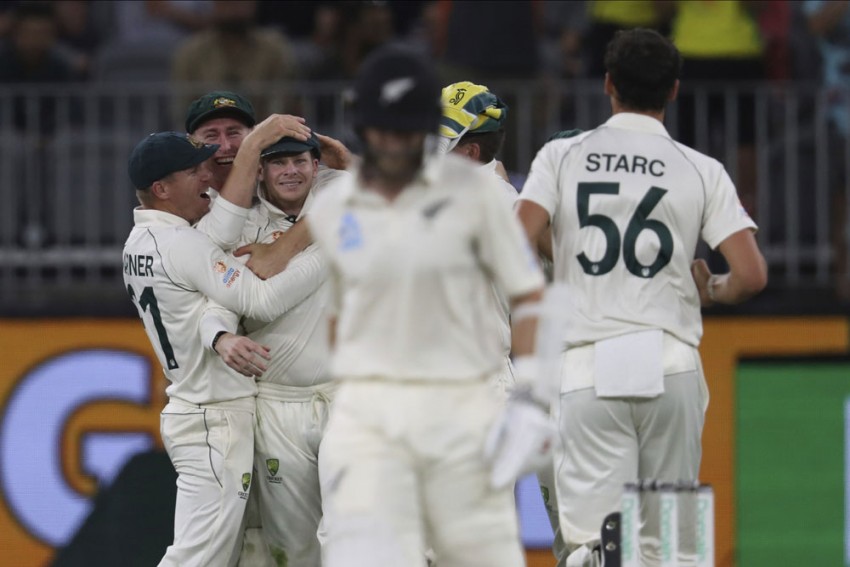 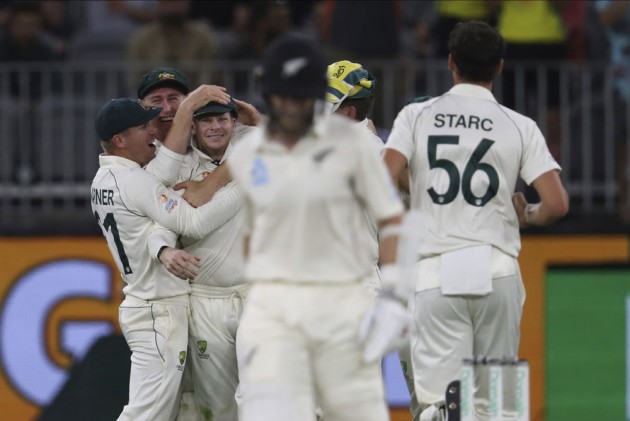 Mitchell Starc put Australia in command in the absence of Josh Hazlewood while Steve Smith took a sensational catch to leave New Zealand in big trouble on day two of the first Test. (More Cricket News)

Marnus Labuschagne fell for 143 after making his third consecutive Test century on the opening day at Perth Stadium, and Travis Head struck 56 in Australia's 416 all out.

New Zealand lost both openers inside two overs of their reply, but their trans-Tasman rivals suffered a big blow when Hazlewood ambled off with a suspected hamstring injury after dismissing Jeet Raval.

Starc came to the fore late in the day-night contest on Friday, Smith diving to remove Williamson (34) in spectacular fashion as the left-arm paceman took 4-31 to reduce the tourists to 109-5 at stumps.

Ross Taylor will resume on Saturday unbeaten on 66 with New Zealand trailing by 307 and BJ Watling yet to get off the mark.

Australia reduce New Zealand to 109/5 having been bowled out for 416 earlier in the day.

Labuschagne put away a couple of glorious drives after Australia resumed on 248-4, but Wagner ended his fifth-wicket stand of 76 with Travis Head by bowling the in-form number three around his legs.

Head looked in great touch in a positive knock, finding the boundary frequently before driving Southee to Mitchell Santner in the covers.

The Black Caps bowled with discipline after lunch, and Raval, used more than he would have anticipated in the absence of Ferguson, dismissed Pat Cummins for 20.

Starc added a brisk 30, smashing Santner for six over long-on, and captain Tim Paine a patient 39 before both were dismissed by Southee, with Australia all out on the stroke of tea.

New Zealand got off to a nightmare start to their reply under the lights, Tom Latham caught and bowled by Starc without scoring in the first over and Hazlewood cleaning up Raval with only his fourth ball.

Taylor joined Williamson at the crease with the tourists in the mire on 1-2, and they would have been relieved to see Hazlewood walk off after pulling up in his second over.

The current and former captain had to contend with some hostile short stuff from Cummins and Starc, but they weathered the storm under pressure and Taylor struck Nathan Lyon for three boundaries in an over.

There was no review from Australia when Williamson appeared to feather Cummins behind, but Smith took off to his right to grab a stunning one-handed catch to remove the prolific skipper - ending a stand of 76.

Although Taylor brought up a hard-earned half-century, Starc strangled Henry Nicholls caught behind down the leg side and generated late swing to bowl nightwatchman Wagner first ball in a great spell to leave New Zealand on the ropes.