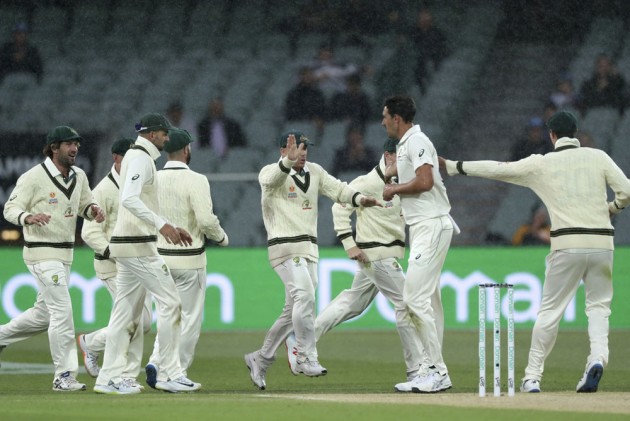 Australia are seven wickets from securing a whitewash of Pakistan in their two-match series after another dominant day in Adelaide, though Yasir Shah did restore some pride for the tourists with a century. (More Cricket News)

Pakistan resumed day three of the second Test on 96-6 but a stand of 105 between Yasir and Babar Azam did see them mount a recovery of sorts.

Yasir had never previously scored 50 in Test cricket but struck 13 fours en route to 113, while Babar fell three short of a second successive hundred. Pakistan could still only manage 302 in reply to 589-3 declared and were forced to follow on against an Australia attack that continued to make frequent inroads into the visitors' batting line-up.

As they did in the final session of day two, Pakistan gave away cheap wickets at the start of their second innings and closed on 39-3, still trailing by 248 runs and destined for an emphatic defeat to end a winless tour.

Rain stopped play prematurely and could frustrate Australia on day four, but with a better forecast for day five, the hosts should have plenty of time to wrap up a 2-0 win.

Rain has brought about an early close at the Adelaide Oval.

Babar had been the only Pakistan batsman to emerge from day two with any credit and he continued to take the fight to Australia as he closed on a third Test century.

It did not arrive, however, as Mitchell Starc, who took 6-66 in the first innings, drew a thick edge and Tim Paine claimed a diving one-handed catch.

Shaheen Shah Afridi was trapped lbw from the next delivery but Starc missed out on a hat-trick and Yasir forged an unlikely ninth-wicket stand with Mohammad Abbas (29).

Yasir produced a gritty performance that belied his Test average of 12, yet it was more by luck than judgment that he reached his century, clipping just beyond the grasp of Pat Cummins at mid-on.

He sank to his knees and kissed the ground before twirling his bat in celebration of a feat few would have anticipated.

It was Cummins who broke Pakistan's resistance, a brutal short ball seeing Abbas caught at gully before a similar delivery was top-edged by Yasir, Nathan Lyon hanging on at deep backward square to end the best batting innings of his career.

However, Pakistan's celebratory mood did not last long into their follow-on. Josh Hazlewood trapped Imam-ul-Haq with the final ball before dinner and Steve Smith took a stunning catch at second slip to dismiss Azhar Ali as he tried to work Starc to leg.

Intermittent rain saw the covers come on several times but Hazlewood was able to take the key wicket of Babar before inclement weather called a halt to proceedings for the day, although that will not dampen the spirits of an Australia side set to win by a massive margin.