Australia women are still behind by 234 on the first innings and need 85 more runs to avoid the follow-on against India women. 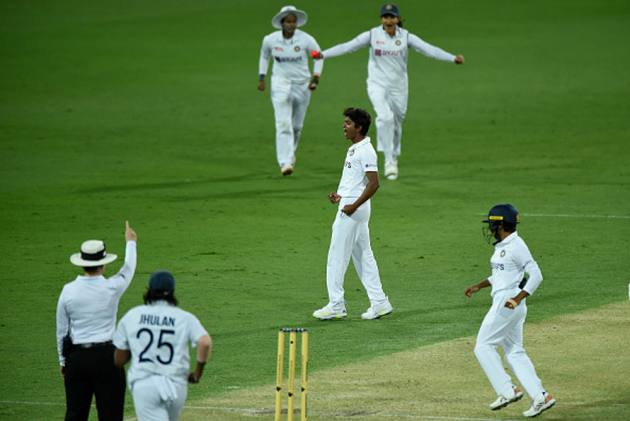 India medium-pacer Pooja Vastrakar on Saturday said it was important to come in with more intent on the final day of the pink-ball Test against Australia at Carrara Oval, Queensland and enforce the follow-on.

Pooja, who picked up two wickets including the big one of Meg Lanning (for 38) and Jhulan Goswami (2/27) restricted Australia to 143 for 4 at stumps in response to India's first innings total of 377 for 8 declared.

The hosts are still behind by 234 on the first innings and need 85 more runs to avoid the follow-on.

"If we have to win the match, we have to come with more intent tomorrow and try and break the partnerships and enforce the follow on," she said at a virtual media interaction at the end of the third day's play.

"It is not impossible. We will try. In two sessions we managed to get four wickets which was crucial. If the intent is there. anything can happen in the game of cricket," Vastrakar, who finished the day with 2 for 31 further said.

Vastrakar got the wicket of opposition captain Meg Lanning, who was unlucky to be adjudged leg before as there was a big inside edge onto the pads.

About bowling to Lanning, she said "I did not focus on the batter. I just focussed on my line and length."

The 22-year old medium-pacer said it was a nice experience bowling with the pink ball under the lights.

"It was a nice experience bowling with the Pink Ball under the lights. Pink ball doesn't move as much as the red ball. Moves initially, but as it gets older it doesn't as much. Had fun bowling under the lights," she added.

About the pitch, Vastrakar said it suited pacers a little more than the spinners, adding "the spinners were trying to keep it tight but the pacers were going for the wickets."

Also, she said it was important to carry on the good work started by Jhulan and Meghna.

"My job was to stick to the right line and lengths and I got the results...," she added.

Meanwhile, Australian batter Alyssa Healy said that presence of DRS can help get rid of umpiring howlers like the one that brought about her skipper Meg Lanning's downfall.

"Definitely, I wouldn't say no to DRS if it is available. I would love to see it in every Test match. It makes it fair and even and to take out the howler would be a nice thing."

The Indian pacers' consistency surprised her and that they had been impressive.

"Their (Indian pacers) consistency has surprised me and has been impressive. It's great to see so many young Indian players getting an opportunity. We prepared for Shikha Pandey but she didn't even get a look in, which is a great sign for Indian cricket," the Aussie opener said.

"It was fun. Walking off isn't as fun, but the challenge was fun. Jhulan has gotten the better of me quite a few times. She's a world class bowler and has been throughout her career. She gets that extra bit of bounce. Challenging especially after 140 overs in the field," she added.

Healy hoped Ellyse Perry, who is batting on 27 would bat for all the 108 overs available on Sunday.

"Perry and McGrath out there together calmed the dressing room together. Perry is unbeaten. Hope she bats for 108 overs," she said with a smile.