India were skittled out for their lowest ever Test total at Adelaide Oval and Justin Langer wants Australia to make another statement. 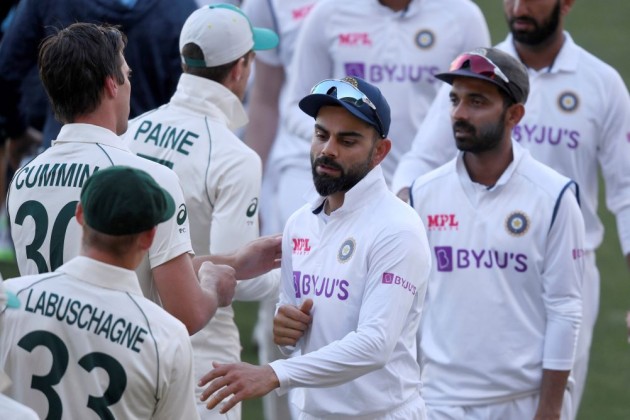 Justin Langer has challenged Australia to show they can become a "great" side when they face wounded India in the Boxing Day Test at the MCG.  Tour Schedule | News | Photo Gallery

India were humiliatingly bowled out for a pitiful 36 in the first Test at Adelaide Oval, where Australia coasted to an eight-wicket victory.

That was the tourists' lowest total in the longest format and the seventh-worst score of all time in Test cricket.

India will be without their captain and best batsman Virat Kohli for the remainder of the four-match series after he returned home for the birth of his first child.

Paceman Mohammed Shami will also play no part in the rest of the series due to a fractured arm, which is another huge blow to India's hopes of reaching the ICC World Test Championship final.

Australia are expected to be unchanged and head coach Langer wants to see them make another statement in such a big event on the sporting calendar, which will be the 100th Test between the two countries.

Langer said: "We were in for a real arm wrestle of a Test match [in Adelaide]. So it was amazing how things turned around. We know how good a team India is, we know we've got to keep improving.

"If we're going to become a great team we have to get better at winning after we win and people didn't quite understand that, but really good teams keep winning and winning, particularly when they're playing good cricket.

"So it's an area we've addressed, we'll have to start well Boxing Day morning and then be consistent, because we know India will fight back as we saw in the first two days of the Test match in Adelaide."

Catch up on all the latest from Australia's preparation for the Boxing Day Test as the MCG gets ready for its grand return.#AUSvIND | @martinsmith9994 pic.twitter.com/BURiPkIOEp

India were always going to make at least one change for the second Test in the absence of Kohli but there may well be several alterations to the side.

KL Rahul could get the nod, while Mohammed Siraj and Navdeep Saini will be hoping to make their Test debut with Shami unavailable.

Prithvi Shaw's place at the top of the order is also under scrutiny after he made just four in his two brief visits to the crease in the opening Test.

Shubman Gill is pushing for selection as India look to avoid a fourth consecutive Test defeat away from home at a famous venue where they won in the longest format two years ago.

MORE OF THE SAME FOR AUSTRALIA

Australia are unsurprisingly set to go with the same line-up that embarrassed India to take a 1-0 lead.

Josh Hazlewood took incredible figures of 5-8 and Pat Cummins claimed 4-21 in an astonishing second-innings capitulation from the tourists.

Joe Burns made a much-needed unbeaten half-century as Australia wrapped up the victory and the opener could do with another significant contribution with the bat.

Langer said when asked about selection: "I'd be a pretty courageous man to change the XI for this Test match after the last one.

"At this stage, unless something happens over the next few days – and things can happen in the world we live in – we'll go in with the same XI, I'd say."

- Australia will be in the hunt for back-to-back Test wins against India for the first time since December 2014.

- India have won their last four Tests on the bounce without Kohli in the side, including an eight-wicket win against Australia in March 2017.

- Steve Smith needs just 69 runs to become the fifth Australian man to reach 1,500 Test runs against India; his batting average of 79.5 from 22 innings is the highest of any Australian to have more than six knocks against them.

- Three of Shaw's last six Test dismissals have seen him bowled, with all of those dismissals coming against pace bowling.