Mitchell Starc claimed four wickets and Pat Cummins finished with three as Pakistan were bowled out for 240 on Day 1 of the first Test at the Gabba. 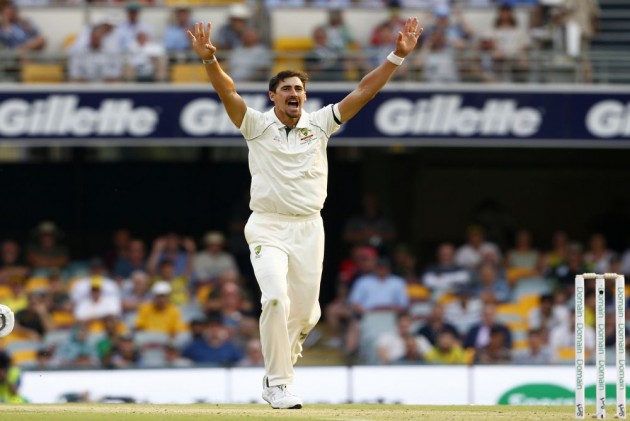 Mitchell Starc and Pat Cummins starred as Australia knocked over Pakistan on the stroke of stumps on day one of the opening Test. (CRICKET NEWS)

Starc claimed four wickets – including the final dismissal of the innings – and Cummins finished with three as Pakistan were bowled out for 240 at the Gabba on Thursday (November 21).

After losing five wickets in a middle-session collapse, Pakistan battled back via Mohammad Rizwan (37) and Yasir Shah (26) until losing 0-3 as Australia made the most of the second new ball in Brisbane.

Pakistan batted first after winning the toss, and it looked to be a wise decision as the tourists frustrated Australia's attack.

Despite a couple of early shouts, Pakistan impressed with captain Azhar Ali (39) and Shan Masood (27) at the crease – the pair making it to lunch unscathed on 57-0.

Azhar and Shan became the first tourists to bat through the opening session of a Test at the Gabba without lunch.

But Australia turned the screws on Pakistan after lunch as Josh Hazlewood (2-46), Cummins (3-60) and Starc (4-52) ripped through the top order.

After Pakistan reached 75-0 shortly after the break, Australia took 4-3 in a stunning seven-over blitz – Cummins setting the tone.

Cummins, the world's number one Test bowler, made the breakthrough with an angling delivery, which removed Shaan, who edged through to Steve Smith at slips.

The floodgates opened from that point as Hazlewood struck to dismiss Azhar – his 100th Test wicket on Australian soil – and then Babar Azam (1).

Starc sent Haris Sohail back to the pavilion caught behind for one, while Iftikhar Ahmed (7) was the last wicket to fall before lunch after inside-edging a Nathan Lyon (1-40) delivery to Marnus Labuschagne.

Resuming on 125-5 following tea, Rizwan came out with intent – hitting Cummins for three boundaries in one over.

Rizwan, however, was unfortunate after he was controversially caught behind on a Cummins delivery which appeared to be a no-ball.

But Pakistan dug deep and looked set to see out the day with four wickets in hand, until Australia took the new ball and Starc claimed back-to-back scalps as the lights came on, with 16-year-old debutant Naseem Shah (7) preventing a hat-trick prior to being caught and bowled at the death.