MS Dhoni and Kedar Jadhav shared an unbeaten 121-run stand for the fourth wicket as India overhauled the tricky 231-run target on a slow wicket with four balls to spare. 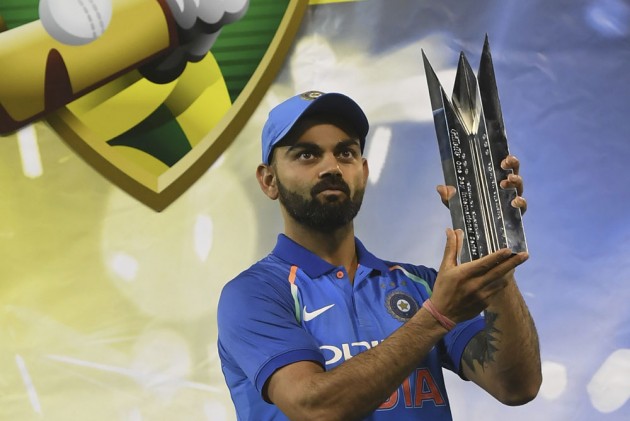 Mahendra Singh Dhoni struck an unbeaten 87 to guide India to a historic ODI bilateral series win against Australia as the visitors beat the hosts by seven wickets in the decisive third match, at the Melbourne Cricket Ground on Friday.

Dhoni and Kedar Jadhav (61) shared an unbeaten 121-run stand for the fourth wicket as India overhauled the tricky 231-run target on a slow wicket with four balls to spare.

Before this, India had become the first team from the sub-continent to win a Test series Down Under.

Have Seen Sachin Tendulkar Get Angry, But Not MS Dhoni: Ravi Shastri

After the match, India captain Virat Kohli said that "It wasn't a great wicket to bat on, so we had to take it deep, but they were professional in getting the job done."

He hailed the efforts shown by man of the match Yuzvendra Chahal and Kedar Jhadav. Both were playing for the first time in the series.

"We were a bit nervous but two set batsmen in knew exactly what they wanted to do. We wanted to get in a good combination. We wanted to give Kuldeep a rest and we don't want to be too predictable as well. Chahal came in and bowled beautifully. 6/42 was magnificent. Kedar with bat and ball is always handy," the skipper said.

Hailing India's Test and ODI wins as a collective effort, Kohli said that if someone gave him these results before the tour, he would have taken with both hands.

"We have been here for a long time. It's been an amazing tour for us. We drew the T20 series, won the Test and the ODI series. If someone gave me these results before the tour I would have taken it with both hands. I am really grateful and proud of the side. It was a collective effort. We are feeling confident and balanced as a side with the World Cup in mind. Few games against New Zealand and few more back home to strengthen the areas that we need to work on as a team," Kohli added.

Losing captain Aaron Finch hailed the victorious team and the great players it has, while also asserting that they competed till the end.

"We took it down to the wire. When you give some great players a couple of chances, it always hurts. The way the boys attacked the defence there, gave it everything. Dropped a few chances but that happens. Our batting in the first couple of games was very good. Today maybe we got impatient, looking at something much higher than what the wicket allowed. Maybe we should have set our targets lower on those sort of pitches," Finch said.

Chahal, who took 6/42, to rightfully earn the man of the match award talked about how he approached the match.

"I enjoyed bowling for the first time in Australia (internationals). The ball was spinning a little bit, so I planned to bowl slow and vary my pace. Looking forward to the New Zealand series," the spinner said.

Dhoni admitted that it was a tough chase, but hailed the presence of Jadhav in the centre. The duo stitched an unbeaten 121-run stand to make it a one-sided affair.

"It was a slow wicket, so it was a bit difficult to hit whenever you wanted to. It was important to take it to the end because some of their bowlers were on the verge of finishing their quota. No point going after the bowlers who were bowling well. Kedar did a great job in playing unorthodox shots and it is important to hit boundaries."