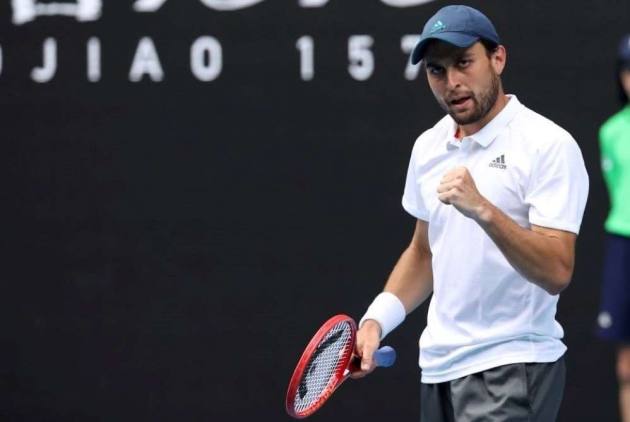 Former world number three Dimitrov won the opening set and was on track to move through in Melbourne, but he faded alarmingly due to a lower back problem.

Karatsev capitalised to oust his much-more fancied opponent – who was barely able to walk afterwards – 2-6 6-4 6-1 6-2 on Rod Laver Arena, the Russian qualifier and world number 114 becoming the first man in the Open Era to reach the semi-finals on his grand slam debut.

Dimitrov was aiming to reach his second Australian Open semi-final and the final four of a slam for the fourth time in his career, and the Bulgarian star started well.

The magical run continues to the final  for @AsKaratsev #AusOpen | #AO2021 pic.twitter.com/He3FRsFyMt

After being broken in the third game, 18th seed Dimitrov put the set back on serve immediately as he took control of proceedings.

But just as Dimitrov – who had not dropped a set en route to the quarters – looked like the man to beat, he wilted in remarkable scenes as Karatsev won the second set to level the match.

Dimitrov's first-serve winners dipped to 69 per cent – his second serve extremely problematic – while his unforced errors grew to 15 in the second set – and Karatsev took advantage.

The third set was a write-off for Dimitrov, who headed to the locker room for medical treatment after Karatsev cruised to a two-sets-to-love lead.

There were remarkable scenes in the third set, Dimitrov virtually conceding as he was unable to keep up with Karatsev due to the injury.

Dimitrov, who only won 12 points in the third set as he was unable to keep up with Karatsev or generate any power on his serve, emerged for the fourth set but, while he tried to will himself on, it only delayed the inevitable in sad scenes.