Karolina Pliskova took out her frustrations during a third-round defeat, but Ash Barty was able to reach week two in Melbourne. 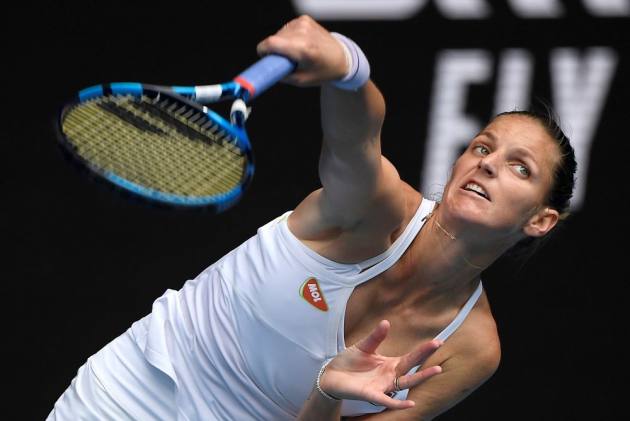 Ash Barty may have her focus on winning the Australian Open right now but suggested a career change could be on the cards in the future.

The world number one made sure she will still be competing during the second week of the tournament in Melbourne by beating Ekaterina Alexandrova in straight sets.

But, having played international cricket for Australia before switching to tennis, could the multi-talented Barty be considering trying another sport?

Elsewhere in Saturday's action, Karolina Pliskova lost her cool – and also a couple of rackets – as she slipped to defeat against the impressive Karolina Muchova in an empty Rod Laver Arena, with fans not able to be present due to a five-day lockdown in the state of Victoria.

Elina Svitolina had no such problems in her third-round match, while Elise Mertens was victorious in just over an hour against Belinda Bencic. Jennifer Brady ended Slovenian qualifier Kaja Juvan's run in the first grand slam of the year.

After winning 6-2 6-4 without ever needing to be at her peak, Barty was cheekily asked by former doubles partner Casey Dellacqua – now working in the media – whether she may be set to switch paths again, once her tennis career has come to an end.

Australian rules football was the answer – but Dellacqua maybe got more than she bargained for from her former playing partner during the on-court interview.

"I thought it was our deal, we're going to AFLW. It's ABCD [the nickname for the pairing from their doubles career]. We come as a package, and I know we will be going to the [Richmond] Tigers that is for sure," Barty said. "You can't go to Carlton. You have to come to the 'Tiges' with me."

Dellacqua replied: "I need to get out there and start practicing some kicking, but you are good. I would love to do that one day."

For Barty, though, the next challenge facing her is Shelby Rogers, who knocked out 21st seed Anett Kontaveit during the evening session.

A disgruntled Pliskova was not impressed when punished for smashing up a racket during her match with compatriot Muchova.

Having received a warning when throwing a racket to the floor during the course of the final game in the opening set, the sixth seed then vented her frustration again on another while in the players' tunnel.

An official witnessed the incident and reported it to chair umpire Alison Hughes, who punished the Czech with a point penalty before she began serving to open the second set.

"It's off court, I'm allowed to do what I want," Pliskova insisted when querying the decision to the official. She would go on to hold before recording two successive breaks, yet somehow failed to force a decider.

Muchova rallied from 5-0 down in sensational fashion, winning seven games on the spin to triumph 7-5 7-5 to make it through to the last 16.

.@ElinaSvitolina eases into the fourth round after defeating Putintseva, 6-4, 6-0.#AO2021 pic.twitter.com/ck3XorcUHQ

Svitolina has still yet to drop a set in the tournament after overcoming 26th seed Yulia Putintseva by a 6-4 6-0 scoreline.

The fifth seed was twice down a break in the first set but, after eventually coming out on top to take a 1-0 lead, breezed through the second in a hurry.

"She has a very different game style from what I played my last two rounds, so it wasn't easy at the beginning to adjust," Svitolina said. "As soon as I was feeling better, I just stepped my game, and it was quite a comfortable win after."

Next up will be Jessica Pegula, who is through to the fourth round at a slam for the first time in her career after thrashing Kristina Mladenovic 6-2 6-1.

There was also success for another American in the main draw, Brady defeating Juvan in straight sets. Her reward is a clash with Donna Vekic, the 28th seed having to save a match point before eventually seeing off Kaia Kanepi 5-7 7-6 (7-2) 6-4 after two hours and 38 minutes on court.