It was a good day for the vast majority of the big names in action in the men's draw at the Australian Open, as well as Nick Kyrgios 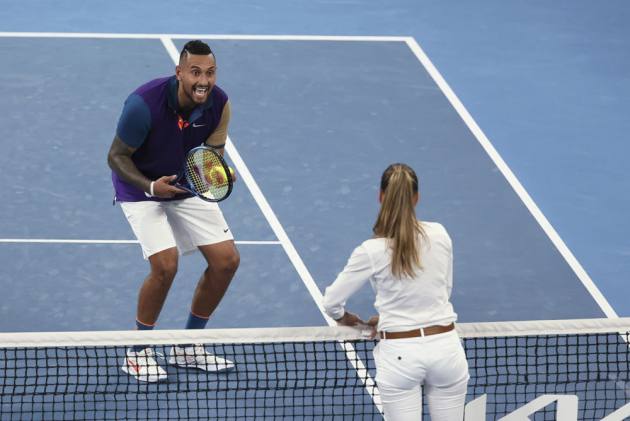 Novak Djokovic admitted there was plenty of room for improvement after coming through a "difficult spot" at the Australian Open, where Nick Kyrgios thrilled the crowd with an impressive comeback. (More Tennis News)

Kyrgios is also through, albeit he even surprised himself by rallying from the brink of defeat to knock out 29th seed Ugo Humbert in the evening session.

Stan Wawrinka was on the wrong of an upset on Wednesday, but there were no such problems for fellow seeds Dominic Thiem, Alexander Zverev, Diego Schwartzman and Milos Raonic.

Meanwhile, Denis Shapovalov and Felix Auger-Aliassime will have to put their friendship to one side when they face each other next, the former setting up the all-Canadian clash by beating Bernard Tomic in three sets.

In the first meeting between the pair, the impressive Tiafoe went toe-to-toe with Djokovic on Rod Laver Arena.

The 23-year-old American's performance – coupled with the Melbourne heat – made the eight-time Australian Open champion sweat, albeit Djokovic felt he could have made life easier for himself.

"I was at times not feeling my timing as well as I normally am. Credit to him. I think he has managed to come out with a great performance and quality of tennis. He put me in a difficult spot," he said.

"I had my chances early in the second set. If I broke him there, maybe the course of the match would be different.

"But again, he was holding his serve very well. I was not really using my break-point chances very well. At times I was too passive. Just wasn't feeling the ball today as well as I normally do."

Next up for Djokovic is another player from the United States in the form of Taylor Fritz, who ousted compatriot Reilly Opelka in a five-set battle.

IN THE NICK OF TIME

Kyrgios described his clash with Humbert as "one of the craziest matches I've ever played" after prevailing 5-7 6-4 3-6 7-6 (7-2) 6-4 - much to the delight of an enthralled audience who watched the drama unfold on John Cain Arena.

The Australian smashed a racket, lost his cool with umpire Marijana Veljovic over a faulty net cord sensor and had to save a pair of match points before eventually coming out on top in a see-saw battle.

"I don't even know what to say, I'm lost for words"@NickKyrgios is all of us right now #AusOpen | #AO2021 pic.twitter.com/oQlGxpGu3S

"I just remember, down that end, when I was a couple of match points down, I don't know what was going on," Kyrgios - who dropped to his knees after sealing victory - said in his on-court interview.

"If you were inside my head, there were some dark thoughts in there. But I live to fight another day and hopefully I can continue to play good tennis in front of you guys."

His reward is a clash with Thiem, the third seed having dismissed the challenge of German Dominik Koepfer in straight sets as he dropped just six games.

Wawrinka appeared on course to survive a serious scare when he rallied from two sets down against Marton Fucsovics, but the Swiss was unable to seize on the chances that came his way in a tense tie-break.

Fucsovics had needed over four hours to overcome wild card Marc Polmans in the previous round and, once again, found a way to get over the finishing line at the end of a Melbourne marathon.

"From 6-1 up, I started to hesitate a little bit in the way I was playing," he said. "I wanted to put the ball maybe too much in and I [was] not going completely for my shots and that's when I started to miss a little bit and it helped him to come back in the match.

"He was fighting well, he's a tough player, he's a good player and he deserved to win."