Novak Djokovic was a changed player after taking out frustration on his racket during his quarter-final against Alexander Zverev. 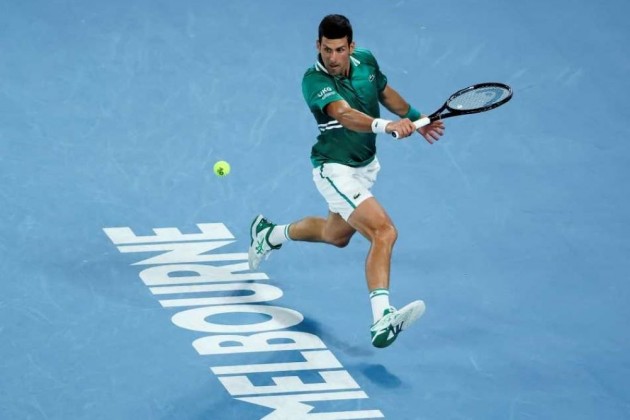 Novak Djokovic lost his temper but refused to let the prospect of Australian Open glory slip away as he edged out Alexander Zverev to reach the semi-finals. (More Sports News)

The world number one destroyed a racket when trailing 3-1 in the third set, after he and Zverev split the opening two sets, and it was one of a number of moments when the Serbian showed heightened volatility during a 6-7 (6-8) 6-2 6-4 7-6 (8-6) win.

Still bothered by an abdominal problem that he sustained in the third round, Djokovic nevertheless strides on and will face Russian qualifier Aslan Karatsev for a place in the final.

Zverev, who played in a bright yellow headband and vest top, with a gold medallion hanging from his neck, will look back on an opportunity missed.

As well as that third-set lead, Zverev was also up a break at the start of the fourth, but the US Open runner-up lacked the composure to convert those hard-earned positions.

If Djokovic's racket-smashing was a tactical move designed to gee himself up and distract Zverev, then it worked a treat.

A nip-and-tuck opener had gone the way of German world number seven Zverev, who then made a wretched start to the second set and was 4-0 behind in the blink of an eye.

Just as momentum began to swing back Zverev's way in the third, Djokovic went into his rage, with a ball girl summoned to clear up the mess the 33-year-old created.

Back came Djokovic as double faults began to leak from Zverev's racket, and soon they were into a fourth set.

Zverev led 3-0 but Djokovic was not going away, seizing on mistakes from an opponent who by the end of the second tie-break of the match could only wonder what might have been.

An ace from Djokovic finished off the contest. After eight titles at Melbourne Park, a hunger for more continues to define his every performance in Australia.

"Emotionally I feel a little bit drained. We pushed each other to the limit," Djokovic said in his on-court interview.

"Other than in the second set I started pretty poorly in all the other three sets. I lost my service very early in the first, third and fourth and allowed him to swing through the ball a bit more, but I regained my focus.

"I broke that racket and things started to shift a little bit for me in a positive direction."