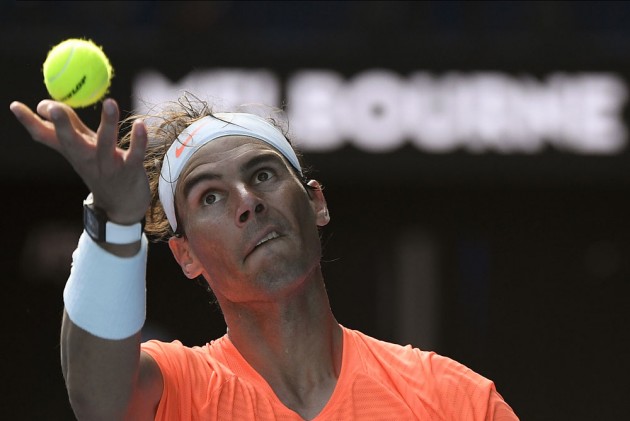 Rafael Nadal reached the Australian Open quarter-finals for the 13th time in his career with a straight-sets win over Fabio Fognini. (More Tennis News)

The Spanish star again looked in strong form in a 6-3 6-4 6-2 victory over Italian 16th seed Fognini behind closed doors on Rod Laver Arena on Monday.

Nadal, who is aiming to win a men's record 21st grand slam title in Melbourne, is yet to drop a set at the year's first major and beat Fognini for the 13th time in 17 meetings.

The world number two will face either Stefanos Tsitsipas or Matteo Berrettini in the last eight.

Nadal gave up an early break lead against Fognini but a powerful forehand return led to another and a 4-2 lead.

Despite serving at just 42 per cent, Nadal closed out the opening set.

Fognini was unable to consolidate a break lead in the second set, having led 4-2, before Nadal recovered from 0-40 down to hold in the eighth game.

That would prove a decisive hold, Fognini blasting a ball into the stands after netting a volley to give Nadal a break point, converted when a forehand went wide before the Spaniard secured the set.

From 4-2 down, @RafaelNadal digs deep to win four games in a row and take the second set against Fabio Fognini, 6-4.

The world No.2 is one set away from the #AO2021 quarterfinals.

Fognini handed Nadal his only loss from two-sets-to-love up at a grand slam at the US Open in 2015, but a break for 2-1 in the third saw the latter end any chances of a repeat on his way to a convincing win.