In her biggest test so far at Melbourne Park this year, Serena Williams overcame seventh seed Aryna Sabalenka in the round of 16 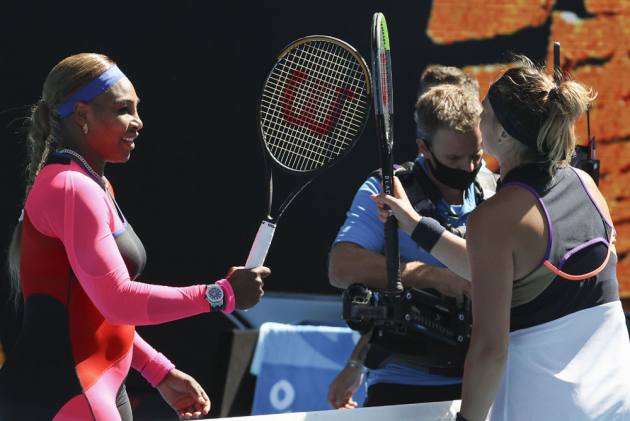 Williams – in pursuit of Margaret Court's record slam haul of 24 – has not tasted major success since winning the Australian Open in 2017.

But former world number one Williams and her bid to match Court remains on track following Sunday's thrilling 6-4 2-6 6-4 victory over seventh seed Sabalenka after more than two hours.

No fans were allowed to attend Melbourne Park amid a coronavirus lockdown in Victoria, but there was still plenty of noise inside Rod Laver Arena in a battle between two big hitters.

Williams, who reached 90 Australian Open wins in 101 appearances in Melbourne last time out – she has played and won more matches than any other woman in the tournament's history, prevailed in a tense opening set.

After fending off a break point in the seventh game, Williams – moving extremely well against the 22-year-old – was gifted a second break-point chance of her own three games later and she pounced as Sabalenka fired a forehand into the net.

Serena defeats a gallant Sabalenka 6-4 2-6 6-4 in one of the most intense matches of the tournament #AusOpen | #AO2021 pic.twitter.com/lvZBwD3ntJ

Williams owned a career 53-8 record in last-16 matches at grand slams heading into the contest – last falling at this stage when she pulled out ahead of her French Open showdown with Maria Sharapova in 2018, while her last match loss at this stage came in Melbourne in 2014.

But Sabalenka was unperturbed, the Belarusian – eyeing her maiden slam quarter-final – an unstoppable force against a helpless Williams in the second set, breaking in the first, third and fifth game.

Williams, who only made 36 per cent of her first serves, was moved around the court as she dropped a set for the first time at this year's Australian Open.

Having cut a frustrated figure in the second set, Williams emerged with renewed figure in the decider – the 39-year-old claiming the decisive break of serve in the fourth game for a 3-1 lead before digging deep to consolidate.

Sabalenka reeled off three consecutive games to put the match back on serve, but she was unable to maintain her charge against Williams, who closed out the match on her opponents' serve.

Data Slam: Serena steps up on serve
Not much went right for Williams on serve in a lopsided second set. But when it mattered most, the 12th seed stepped up by serving at 71 per cent in the third – winning 17 of 22 first-serve points against Sabalenka.