Babar Azam got his maiden international wicket by trapping Mehidy Hasan in front towards the end of the final day's play in second Bangladesh vs Pakistan Test at Dhaka. Pakistan won the match to complete series sweep of Bangladesh. 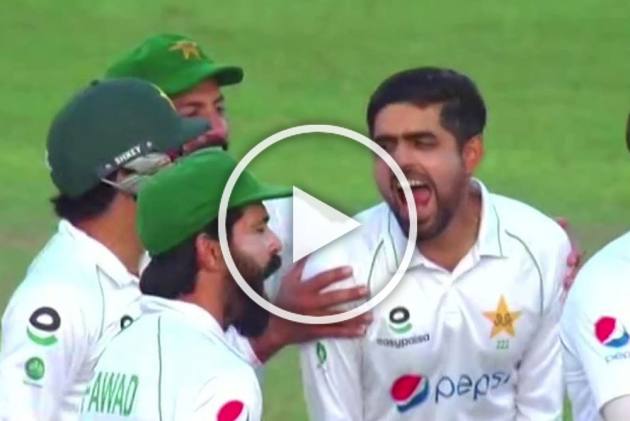 Pakistan completed a 2-0 series sweep of Bangladesh with an innings and eight-run win in the second Test match on Wednesday. After taking a 213-run lead, Pakistan imposed follow-on, but Bangladesh produced a defiant fight-back to frustrate the visitors. And it took a magical over from skipper Babar Azam to end the Bangladeshi resistance at Shere Bangla National Stadium, Dhaka. (More Cricket News)

Pakistan were on course for an easy win with Bangladesh tottering at 25/4 in their second innings. Then Mushfiqur Rahim (48 off 136), Liton Das (45 off 81), returning Shakib Al Hasan (68 off 130) and Mehidy Hasan (17 off 70) played crucial knocks to stall the Pakistan progress.

The Hasans were involved in a half-century stand for the seventh-wicket and they looked fairly comfortable in the middle against the Pakistan attack, which at times looked out of sorts.

But in an enterprising move, Azam introduced himself into the attack and it did the trick. The skipper trapped Mehidy in front for his maiden wicket. It was the opening the visitors needed to seal the win.

The 2-0 series win helped Pakistan collect 26 ICC World Test Championship points (12 for each win). They now sit second in the points table with 36 points from two series (three wins and one defeat), behind Sri Lanka (24 points from two wins in two against West Indies). For the record, the ICC has devised the ranking on the percentage of points won. Check tje latest standing HERE.

Sri Lanka have 100 percentage points as against Pakistan's 75. India have 42 points with three wins, one defeat and two draws. But their percentage point is 58.33. Check the latest ICC World Test Championship (2021-2023) points here.

Pakistan, who reached the semi-finals of the ICC Men's T20 World Cup, had also won the three-match T20 series against Bangladesh 3-0. They will next play West Indies in a limited-overs series, featuring three T20s and three ODIs in Karachi.