Modric opened the scoring in the 14th minute and set up captain Sergio Ramos to score their goal against the hosts. 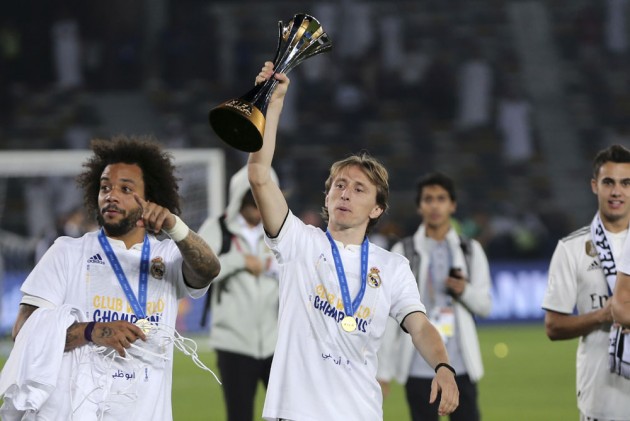 Modric, 33, opened the scoring in the 14th minute and set up captain Sergio Ramos to score their goal against the hosts.

Al-Ain came out boldly and nearly took the lead in the early going when an amateurish clearance by Brazilian defender Marcelo gave Hussein el-Shahat a golden chance to score.

The Egyptian midfielder made a couple of cutbacks, including outmanoeuvring Real Madrid goalkeeper Thibaut Courtois, but his shot was saved at the goal line by Sergio Ramos.

In the 14th minute, Modric produced a stunning strike with one touch from outside the box to open the scoring.

The UEFA Champions League winners then had numerous additional opportunities to score over the remainder of the first half, but a shot by Lucas Vasquez grazed the woodwork and Karim Benzema sent a close-range shot over the crossbar.

It was just a matter of time though for the Blancos' superiority to be reflected on the scoreboard.

At the one-hour mark, Marcos Llorente doubled Real Madrid's lead when he rifled a volley on a corner-kick play just inside the left upright, while Ramos extended the La Liga club's advantage to 3-0 with a header off a corner kick in the 78th minute that tipped off Eisa's right hand and into the back of the net.

Japanese defender Tsukasa Shiotani pulled one back for Al-Ain on a header off a free kick in the 86th minute, but Real Madrid stretched their lead back to three in second-half injury time when a shot by late substitute Vinicius Junior entered the goal after ricocheting off defender Yahia Nader.

Gareth Bale, who had a hat trick in a 3-1 semi-final victory over the Kashima Antlers (the Asian champions) and came close to scoring on a couple of occasions in the championship match, was selected as the most valuable player of this year's Club World Cup.

Llorente was named the top player of Saturday's final.