Pakistan chased down Bangladesh's 127/7 with four balls to spare in the first T20I match. Catch highlights of the BAN vs PAK cricket match here. 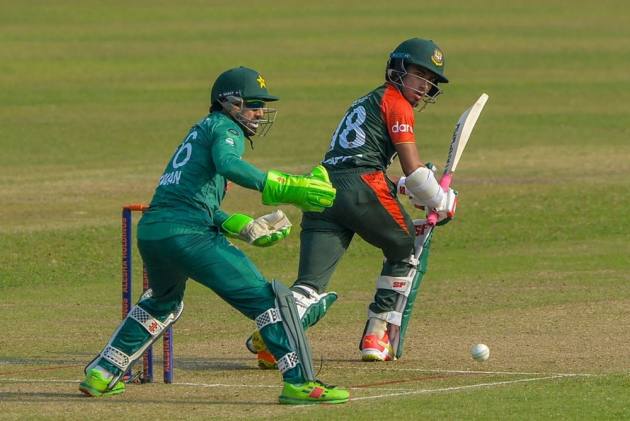 Pakistan survived a rare top-order failure to beat Bangladesh by four wickets in the first T20 International at Shere Bangla National Stadium, Dhaka on Friday. After restricting the hosts to 127/7 in their match in Bangladesh in five years, Pakistan reached the target with four balls to spare, mainly thanks to an unbeaten 36-run seventh-wicket stand between Mohammad Nawaz and Shadab Khan.

After losing four wickets for 24 runs in the powerplay, Pakistan rallied around Fakhar Zaman (34 off 36) and Khushdil Shah (34 off 35), who stitched a 56-run stand in 50 balls. But the T20 World Cup semi-finalists still needed some fireworks from Shadab (21 off 10) and Nawaz (18 off 8) in a nervy chase. For Bangladesh, Taskin Ahmed got a brace, while Mahedi Hasan, Mustafizur Rahman and Shoriful Islam took one wicket each.

Earlier, Bangladesh won the toss and opted to bat first. With the trio of Shakib Al Hasan, Tamim Iqbal and Mushfiqur Rahim missing, the hosts struggled with the bat. Afif Hossain top-scored with 36 off 34, while Nurul Hasan and Mahedi Hasan contributed with 28 and 30 runs each.

The second match of the three-match T20I series is scheduled for Saturday (November 20) at the same venue. Catch highlights of the first T20I cricket match between Bangladesh and Pakistan here:

Shoriful Islam on with his third over. Khushdil Shah hits the second ball for a four, to long-off. Two singles, and the wicket. Khushdil (34 off 35), caught behind. Mohammad Nawaz is the new man. Six runs and a wicket in the over. Pakistan need 32 runs in 18 balls. PAK - 96/6 (17)

Mustafizur Rahman returns for his third over. Khushdil Shah hits the fourth ball for a four, then a wide for height. Eight from the over. Pakistan need 38 runs in 24 balls. PAK - 90/5 (16)

Taskin Ahmed returns for his fourth over. Fakhar Zaman hits the first ball for a four. Then the wicket. 56-run stand broken. Fakhar (34 off 36) caught behind. Faint edge and easy for Nurul Hasan. Shadab Khan is the new man. PAK - 80/5 (14.2)

Bangladesh captain Mahmudullah introduces himself into the attack. Two singles. Pakistan manage to score 17 runs in the last 30 balls. They need 88 runs in the last ten overs. PAK - 40/4 (10)

Stunning dismissal. Shoaib Malik plays a defensive shot off the last ball of the powerplay and it goes to Bangladesh wicketkeeper. The veteran Pakistan batter takes a stroll, lazily and is out. Run out. Touch and go. Nurul Hasan hits the wickets and Malik's bat some time to touch the ground. He goes for a three-ball duck. PAK - 24/4 (6)

Mahedi Hasan with his second over. He traps Haider Ali in front. LBW. Pakistan take review, but it's crashing into the middle. Ali goes for a three-ball duck. PAK - 23/3 (5)

Taskin Ahmed continues. Babar Azam hits the fourth ball for a four, but loses his wicket two balls later. Bowled by a Taskin beauty. Pakistan skipper goes for 7 off 10. PAK - 22/2 (4)

Mustafizur Rahman gets his first over. And he gets the wicket of Mohammad Rizwan (11 off 11). Bowled. Fakhar Zaman joins skipper Babar Zaman in the middle. PAK - 16/1 (2.4)

Mahedi Hasan with the new ball. Mohammad Rizwan takes the strike. He plays the third ball to backward point for three runs. Babar Azam his opening partner. Four runs from the over.

Hasan Ali with the penultimate over. He knocks over Aminul Islam (2 off 5). The over starts with a six, hit by Mahedi Hasan over mid-wicket. Taskin Ahmed joins Mahedi Hasan in the middle. BAN - 110/7 (18.4)

Shadab Khan almost ticks the wickets column. Afif Hossain is given LBW out. Bangladesh take the review. Pitching on leg, and spins enough to miss the off. Atif survives. BAN 40/4 (9.5)

Shadab Khan gets his first over. Four singles. Mahmudullah and Afif Hossain are rebuilding the Bangladesh innings. BAN 37/3 (8)

Mohammad Wasim Jr continues and second wicket for the right-arm pacer. Najmul Hossain Shanto goes for 7 off 14. Caught and bowled. Mahmudullah is the new man. BAN - 16/3 (5)

Mohammad Wasim Jr gets his first over and strikes. Saif Hassan is gone for 1 off 8. Caught behind off the sixth ball. In the previous over, Hasan Ali removed Mohammad Naim for 1 off 3. Najmul Hossain Shanto and Afif Hossain are the new batters in the centre. BAN 10/2 (3)

Mohammad Nawaz with the new ball. Mohammad Naim takes the strike. A single off the second ball. Three dots to Saif Hassan. And a wide. Two from the first over.

Bangladesh hand debut to 23-year-old top-order batter Saif Hassan. For Pakistan, Shaheen Afridi is the notable absentee. He sits out.

"It's a new team, a lot of youngsters are coming in... Responsibilities will always be there, obviously, if those three -- Shakib Al Hasan, Tamim Iqbal and Mushfiqur Rahim -- were there, it would be easy decision-making. But it's a good opportunity for the others," says Bangladesh captain Mahmudullah.

Bangladesh win the toss and opt to bat first against Pakistan.

AB de Villiers has announced his retirement from all formats of cricket, effectively ending his association with Royal Challengers Bangalore.

Earlier in the day, Tim Paine stepped down as Australia Test captaincy over 'sexting' scandal.

Bangladesh will derive confidence from their performances at home. Skipper Mahmudullah's captaincy will be tested once again after Bangladesh selectors named a squad minus some star players. While Shakib Al Hasan and Tamim Iqbal are out due to injuries, former skipper Mushfiqur Rahim, Soumya Sarkar and Liton Das have been dropped due to poor form.

On the slow turners in Mirpur (Dhaka), Bangladesh will bank on their spinners. The spin duo of Mahedi Hasan and Nusum Ahmed will have to play a bigger role since Shakib's four overs of left-arm spin will be missed. The Bangladesh pace attack will be led by Taskin Ahmed, who finished with six wickets in six matches in the T20 World Cup.

Pakistan skipper Babar Azam said Bangladesh were dangerous at home and he will take nothing for granted in spite of a superb outing at the World Cup. The team is loaded with performers and all eyes will be on Mohammad Rizwan, the opener who scored 281 runs in the T20 World Cup.

Babar Azam (303 runs in the World Cup), regarded as one of the world's top batsmen, will bank on his bowlers to deliver. While Shaheen Afridi remains the bowling spearhead, it will be spinning all-rounders Shahdab Khan and Mohammad Nawaz who will hold the key for Pakistan.