Not only do Bangladesh need a victory but they also have to win big to improve their net run rate and hope Oman lose vs Scotland. 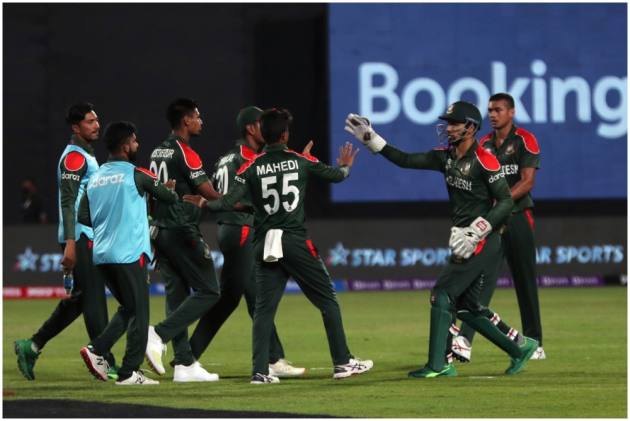 Their campaign back on track, Bangladesh will start as overwhelming favourites when they face Papua New Guinea in a must-win Group B league game of the ICC Men’s T20 World Cup in Al Amerat on Thursday.

Bangladesh, who came into the tournament as the sixth-ranked team after having beaten the likes of New Zealand and Australia at home, suffered a shock six-run defeat against Scotland.

But the Mahmudullah-led side bounced back in style, getting the better of Oman by 26 runs on Tuesday night.

Bangladesh will need a win to keep their chances of making it to the Super12 alive, as they only have two points from two games, and are placed third with a net run-rate of +0.500.

A win against Papua New Guinea will give them two crucial points and then they would also hope that Oman lose their final game against Scotland, who have already qualified from the group, to ensure their passage into the next stage.

First up though, for that to happen opener Mohammad Naim, who scored a match-winning 64 in their game against Oman, will have to continue his good form. In addition, he would need support from the likes of Liton Das, one-down Mahedi Hasan and skipper Mahmudullah, as their middle-order needs to come good.

Also the role of star all-rounder Shakib Al Hasan would be crucial for the Asian side. Shakib has been among the runs and wickets and he could pose a serious challenge to the PNG batters on a track that is conducive for spinners.

Their bowlers led by the redoubtable Mustafizur Rahman have put up an impressive show against Oman and the left-arm seamer, who claimed a four-for, would like to continue from where he had left on Tuesday. Off-break bowler Mahedi Hasan would also be keen to dismantle the opposition batters.

Others like right-arm pacers Taskin Ahmed and Mohammad Saifuddin would also need to bowl in the right areas as the 'Bangla Tigers' look to field an unchanged XI. Mahmudullah had conceded that team would have to improve in a lot of areas despite their win against Oman.

“We need to improve in a lot of areas, but I'll take the win. Delivering the win for the country is the most important thing and I hope they are happy,” Mahmudullah had said.

Meanwhile, the Assad Vala-led Papa New Guinea lost both their games against Oman (by 10 wickets) and Scotland (by 17 runs) and are already out of contention. But they would surely like to sign off the tournament on a positive note.

Vala, who hit a brisk half-century in their lung-opener, would need to play big innings and also need support from the other batters. Needless to say, their bowlers would also need to bowl their hearts out to contain the more experienced opposition batting line-up.