Overwhelmed by their maiden win on New Zealand soil, Bangladesh players celebrated the achievement in the dressing room by singing the Bengali version of the famous song, ‘We shall overcome someday.' 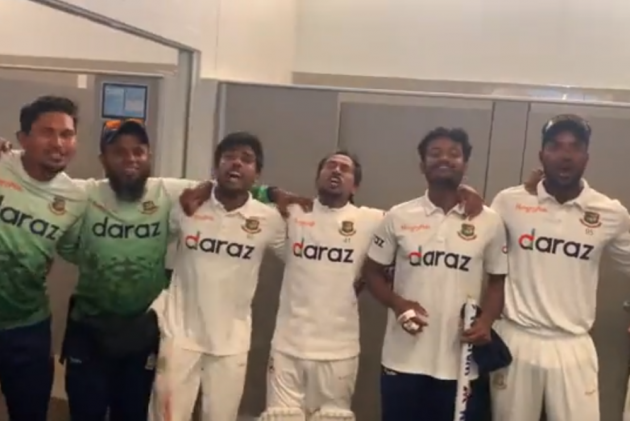 Bangladesh registered their first-ever Test win outside Asia on Wednesday when they defeated New Zealand by eight wickets at the Bay Oval in  Mount Maunganui. After getting a 130-run first-innings lead, the Bangla Tigers bowled out the Kiwis for 169 needing just 40 runs to win. Bangladesh reached the target in 16.5 overs. (More Cricket News)

The platform for the victory was laid by Ebadot Hossain, who produced career-best figures of 6 for 46 on the final day to bring New Zealand's downfall in the second innings. Chasing a small target, Bangladesh lost Shadman Islam early but it couldn’t trouble them as Najmul Hossain Shanto’s 17 and skipper Mominul Haque’s 13 was enough to help them get over the line.

Soon after Mushfiqur Rahim hit the winning runs, the entire Bangladesh camp erupted in joy. They not only broke New Zealand’s unbeaten streak of 17 Tests at home and eight consecutive series wins but also put a question on the ‘minnows’ tag which is put on them time and again.

The magnitude of the victory, unsurprisingly, made No.9 Bangladesh the topic of talk over the internet on Wednesday. Their historic win was hailed all over the world, even though their improved game isn’t a rare sight anymore.

Overwhelmed by their maiden win on New Zealand soil across formats, Mominul Haque and Co. celebrated the achievement in the dressing room by singing the Bengali version of the famous song- ‘We shall overcome someday’.

Bangladesh Cricket posted the video on social media and in no time, the clip went viral. “Bangladesh Team dressing room celebrations following the historic win at Mount Maunganui,” said the country's cricket board while posting the video on Twitter.

“…We won because of the bowlers, both in the first and second innings they were outstanding. They did all the hard work and bowled in the right areas. He (Ebadot Hossain) was unbelievable for us. We didn't play well in the last couple of Test matches and it was important to put our legacy to the next level,” said Bangladesh skipper Mominul Haque after winning the game.

With this win, Bangladesh lead the two-match series 1-0. The second and final Test match of the series starts on January 9 at the Hagley Oval, Christchurch.