After setting a 142-run target for New Zealand, Bangladesh restricted the Kiwis to 137/5 in the second T20I match. Catch highlights here 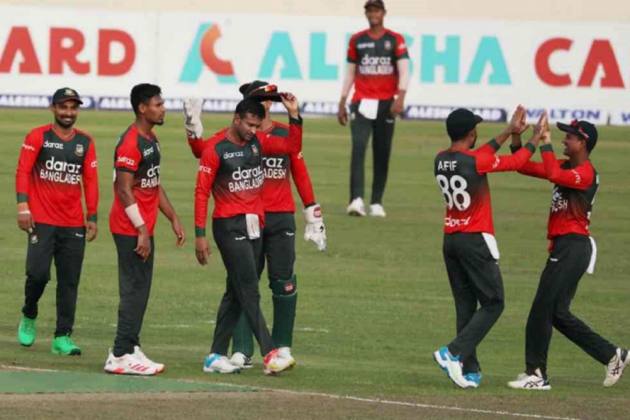 Spinners came to the fore once again as Bangladesh defeated New Zealand by four runs in the second T20I match in Dhaka on Friday. Chasing a target of 142 runs, the Kiwis could manage only 137/5 despite a valiant 67 off 49 from skipper Tom Latham, who remained unbeaten at Shere Bangla National Stadium. Needing six runs off the last ball, Latham managed only a single as Mustafizur Rahman held his nerve. Record-chasing Shakib Al Hasan, who needed four wickets to overtake Sri Lankan legend Lasith Malinga (107) to become the highest wicket-taker in T20Is, claimed two. Mahedi Hasan and Nasum Ahmed also got two and one each. Earlier, Bangladesh skipper Mahmudullah won the toss and elected to bat first. Openers Mohammad Naim (39 off 39) and Liton Das (33 off 29) added 59 runs in 9.3 overs to give the hosts a perfect foundation, but Rachin Ravindra claimed three wickets to help New Zealand restrict Bangladesh to 141/6. Bangladesh won the first match by seven wickets. The third match is scheduled for Sunday (September 5) at the same venue. Catch highlights and cricket scores of BAN vs NZ here. (REPORT | SCORECARD) (ENG v IND OVAL TEST SCORECARD)

Bangladesh beat New Zealand by four runs to take a 2-0 lead in the five-match series.

Bangladesh set a target of 142 runs for New Zealand.

3:10 PM IST: Bangladesh have won the toss and opted to bat first.