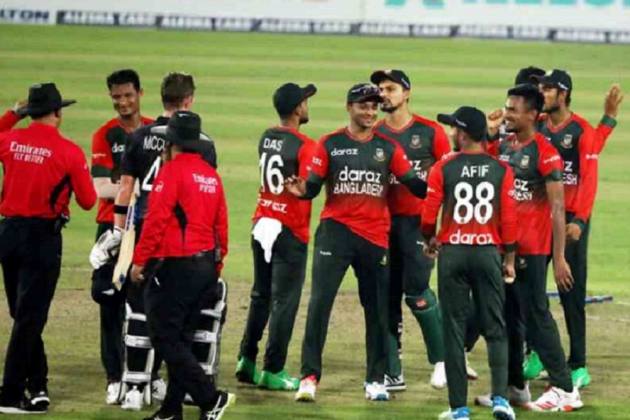 New Zealand humbled high-flying Bangladesh by 52 runs in the must-win third T20 International cricket match at Shere Bangla National Stadium, Dhaka on Sunday. The win helped Kiwis end a two-match losing streak after Bangladesh won the first two matches at the same venue. Skipper Tom Latham won the toss but the Kiwis struggled against Bangladesh slow bowlers and were 62/5 in 11 overs. Then, Henry Nicholls (36) and Tom Blundell (30) gave a late flourish in an unbeaten sixth-wicket stand to help Kiwis post 128/5. A fighting total, one should say. But it proved more than enough as Ajaz Patel claimed 4/16. Fellow spinner Cole McConchie took three wickets for 15 runs as hosts batsmen found themselves in a web of spin, for a change! Record-chasing Shakib Al Hasan had a quiet day - wicketless and a two-ball duck. The all-rounder needed two wickets to overtake Lasith Malinga as the highest wicket-taker in T20Is. Mushfiqur Rahim was Bangladesh's top scorer with an unbeaten 20 off 37. Bangladesh lead the five-match series 2-1. The fourth match is scheduled for Wednesday (September 8).

3:07 PM IST: New Zealand have won the toss and opted to bat first. The visitors have made three changes to the side, while Bangladesh are unchanged.