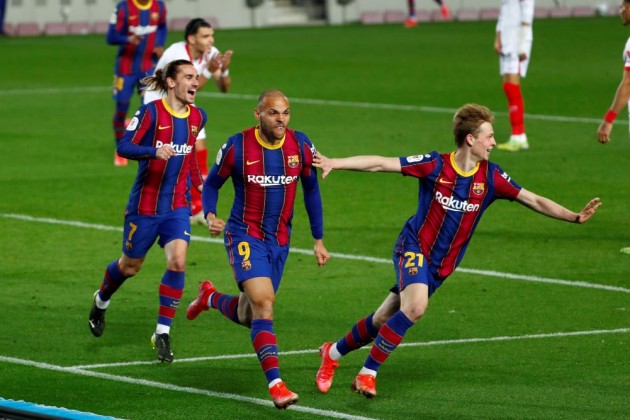 Barcelona produced a storming fightback to reach the Copa del Rey final thanks to a dramatic 3-0 victory over Sevilla after extra time at Camp Nou.  (More Football News)

The Catalan giants hit the headlines at the start of the week when ex-president Josep Maria Bartomeu was among those arrested on Monday - he was then provisionally released under charges of unfair administration and corruption of business - as part of a police investigation into last year's 'Barcagate' scandal.

Barca's players looked anything but affected by off-field events, however, as they dominated the majority of the second leg, Ousmane Dembele giving them a richly deserved first-half lead.

Lucas Ocampos had a penalty saved by Barca goalkeeper Marc-Andre ter Stegen with 17 minutes to go and Gerard Pique made him pay by making it 2-2 on aggregate right at the end of stoppage time, moments after Sevilla had seen Fernando sent off.

Martin Braithwaite put Barca in front early in extra time and Luuk de Jong - who had been substituted - was shown a red card for dissent after Sevilla were not awarded a penalty, with the hosts going through to face either Athletic Bilbao or Levante in the final.

93 - Gerard Piqué has scored 49 goals for @FCBarcelona in all competitions, 20 of them have been headers. He has scored his latest goal for the club in any competition (93:08). Heroic. pic.twitter.com/UABrfKDeDl

Dembele opened the scoring in the 12th minute in a scintillating Barca start, showing excellent close control in the penalty area before drifting outside the box to find the top-right corner with a sublime right-footed finish from 20 yards out.

The Blaugrana were causing Sevilla all sorts of problems with their slick passing and movement in a relentless first-half display, Marcos Acuna clearing a deflected shot from the brilliant Lionel Messi off the line.

Barca were almost level when Jordi Alba's acrobatic volley rattled the crossbar and there was more drama at the other end of the field when Ocampos' tame penalty was saved by Ter Stegen after the Sevilla player had been upended by Oscar Mingueza.

Substitute Antoine Griezmann then produced the impact Ronald Koeman hoped for with time almost up, delivering an inviting cross for Pique to head home, this after Fernando was shown a second yellow card for upending Messi.

Barca were in front for the first time in the tie four minutes into extra time, Braithwaite coming off the bench to nod in Alba's superb cross.

Sevilla thought they had a second penalty for handball against Clement Lenglet but the VAR verdict ruled there was no intent, resulting in De Jong seeing red on a miserable night for the visitors.

What does it mean? Brilliant Barca show no sign of turmoil

Two days after dramatic off-field events at the club, Barca's players were magnificent and thoroughly deserved to book a place in the final.

Having beaten the same opponents 2-0 in LaLiga at the weekend, they swarmed all over Sevilla from the start and had 22 shots in total, eight of which were on target, in a one-sided encounter.

It was vintage Barca at times as they toyed with Sevilla to spark celebrations ahead of Sunday's election to decide who will be the club's next president.

Dembele looked full of confidence following his goal against the same opponents last time out, taking the opener superbly to give Barca an early advantage.

The French forward also made three key passes as he showed his creativity, which Messi also provided in abundance. The mercurial captain attempted 85 passes in the Sevilla half as he pulled the strings, also sending in seven crosses in what was an inspirational display.

Ocampos could have sealed Sevilla's place in the final, but the substitute was unable to beat Ter Stegen from 12 yards out.

There was a lack of conviction in his attempt that rather summed up a performance, one which also saw Sevilla punished for a lack of discipline.

Barca face a LaLiga trip to Osasuna on Saturday, with Sevilla also on their travels as they face Elche on the same day.