Antoine Griezmann was dropped for Ousmane Dembele, who scored the third of Barcelona's goals in a 4-0 victory over Sevilla. 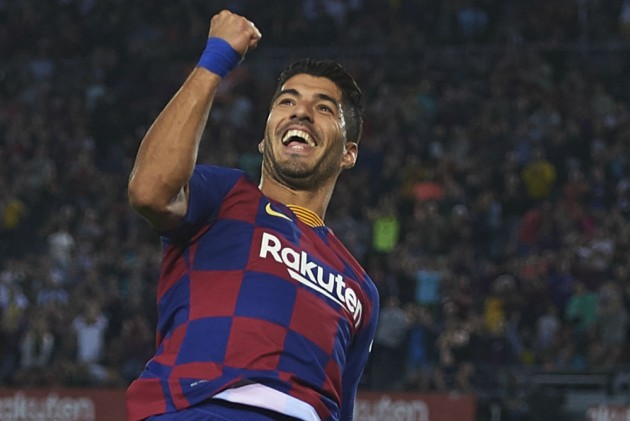 Luis Suarez and Ousmane Dembele scored memorable goals for Barcelona as Ernesto Valverde's decision to drop Antoine Griezmann was vindicated in a 4-0 victory over Sevilla.

While their €120million signing sat among the substitutes, Suarez's acrobatic overhead kick got the LaLiga champions off the mark, Arturo Vidal polished off a sublime passing move with the second and Dembele scored a solo effort to all but end the contest.

Lionel Messi wrapped up the win with a curling second-half free-kick and the synergy between Barcelona's front three, which has not always clicked with Griezmann involved, will not have been lost on Valverde.

The match ended in unsavoury fashion for the Catalans, though, who saw debutant Ronald Araujo and Dembele sent off shortly before injury time.

Luuk de Jong received good service from Lucas Ocampos in the early stages but he fluffed three chances put Sevilla ahead before Suarez broke the deadlock with a moment of magic 27 minutes in.

The Uruguay marksman watched Nelson Semedo's cross loop through the air and met it with an overhead kick into the bottom corner of the net before goalkeeper Tomas Vaclik could react.

The goal settled the hosts and five minutes later a move that incorporated 25 passes and all 11 Barcelona players culminated in Arthur's weighted ball, which allowed Vidal to slide in and glance a shot past Vaclik.

Dembele made it 3-0 inside eight first-half minutes when his slaloming run tore through Sevilla's defence, the 22-year-old opening his body and side-footing in at the far post.

The second half started just like the first, with De Jong squandering a great chance to score when he drilled a shot against the post from just inside the Barca box.

The hosts were soon back on top and Messi twice surged through Sevilla's midfield before putting the finishing touches on a fine win with a dipping, curling free-kick 12 minutes from time.

Valverde sent on Araujo for his debut, which turned sour when he was judged to have fouled Javier Hernandez as the Sevilla forward went through on goal and was shown a red card along with Dembele, who was sent off for his protests.

What does it mean? Barca go second

After Atletico Madrid were held to a goalless draw at Real Valladolid, Barcelona took full advantage and claimed a result that moved them up to second place in the table, two points behind leaders Real Madrid.

A run of mixed results in August and September left Valverde under pressure but his players looked calm and assured here, none more so than Frenkie de Jong, who looks every inch the composed midfield lynchpin to succeed Sergio Busquets – a second-half substitute here.

No luck for Luuk

While Barca's De Jong barely put a foot wrong his Sevilla namesake had a torrid evening, the centre-forward missing four clear chances to give the visitors a foothold in the game.

100 - Lionel Messi has scored his 100th goal from outside the box for @FCBarcelona in all competitions (43 direct free-kick goals). Specialist. pic.twitter.com/iBAi9hYVVn

- Barcelona's Lionel Messi has become the first player to score in 16 consecutive LaLiga seasons in the 21st century.

- Luis Suarez has scored 183 goals for Barca in all competitions, one behind Jose Samitier, their fourth-highest all-time top scorer.

- Messi scored his 100th goal from outside the box for Barca in all competitions, 43 coming from direct free-kicks.

- Julen Lopetegui has conceded nine goals in his two LaLiga games at Camp Nou as a coach (16 shots on target faced).

- Barca have not lost any of their 23 LaLiga matches with Arturo Vidal in their starting XI (W15 D8).

- The Catalans received two red cards in the same LaLiga game for the first time since February 2010 against Getafe.

Barcelona will hope to extend their winning run to five matches in all competitions by beating Eibar away from home on October 19, while Sevilla aim to get back on course as they entertain Levante a day later.