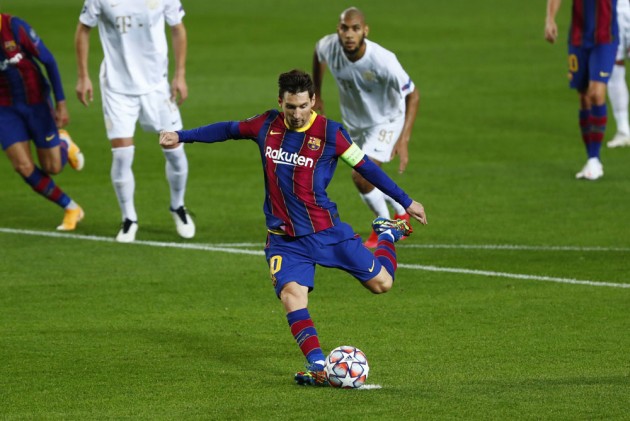 Lionel Messi and Ansu Fati were on record-setting form as Barcelona opened their Champions League campaign with a thumping 5-1 win over Ferencvaros at Camp Nou on Tuesday, although Gerard Pique was dismissed for the hosts. (More Football News)

Ronald Koeman's side suffered a surprise 1-0 defeat to Getafe in LaLiga at the weekend and looked shaky in the early stages against their Hungarian opponents, who were making their first appearance in the Champions League group stages for 25 years.

Messi's penalty shortly before the half-hour mark settled any nerves, though, while 17-year-oldl Fati doubled their advantage in the 42nd minute.

Philippe Coutinho added a third early in the second half before Ihor Kharatin pulled one back for the visitors from the penalty spot after Pique had been dismissed for bringing down Tokmac Nguen inside the area. Barca had the final say, however, substitute Pedri scoring his first goal for the club eight minutes from time and Ousmane Dembele adding a late fifth.

Ferencvaros were far from overawed in the early stages against their illustrious opponents, twice going close to taking the lead inside the opening 20 minutes.

Nguen had a fine strike ruled out for offside before Isael crashed a powerful drive against Neto's crossbar from 10 yards.

They were left to rue those close calls in the 27th minute when Messi powered home from the spot after he had been tripped in the area by Adnan Kovacevic.

It made the Argentina international the first player in Champions League history to score in 16 consecutive seasons.

Fati was denied by the outstretched leg of Denes Dibusz but then got the better of the Ferencvaros goalkeeper three minutes before the interval, steering a volley inside his left-hand post after a sublime looped pass from Frenkie de Jong.

That saw Fati become the first player to score more than one Champions League goal before turning 18.

Kharatin restored some pride for the visitors 20 minutes from time after Pique clumsily hauled down Nguen as he entered the penalty area following a ball over the top.

Any hopes of a dramatic comeback were extinguished, however, as Pedri turned home from 12 yards and Dembele thundered home from Messi's pass in the final 10 minutes to seal a comfortable three points.

What does it mean? Barca in cruise control after tough opening

It could have panned out very differently for Barca had Ferencvaros struck during that impressive early spell. As it was, some Messi magic set the hosts on their way to the kind of win that most people would have expected before kick-off.

Koeman, who became the fifth head coach to take charge of six or more teams in the Champions League, will certainly not be getting carried away and knows his side will face a far sterner test when they travel to Juventus next week.

Fati's stunning ascent does not look like slowing down anytime soon. The youngster produced another fine display - and goal - with all three of his shots on target, and the assist for Coutinho was another mark of his quality.

2 - Barcelona's Ansu Fati is the first player ever to score more than one Champions League goal before turning 18. Talent. pic.twitter.com/pB2KaTU264

Pique well off the pace

Pique declared he was willing to be the first to step aside after Barca's humiliating 8-2 defeat to Bayern Munich in last season's Champions League quarter-final.

He stuck around, though, and was badly caught out by Nguen in the incident which led to his dismissal. If he puts in more displays like this, he can expect people to start asking when he will make way for fresh blood. The post-match announcement that he has signed a new four-year contract was therefore quite a revelation.

- Barcelona stretched their unbeaten run at Camp Nou in the Champions League to 37 games (W33 D4). They have not conceded more than once in any of the 37 games in this run.
- Barcelona have won their opening home game in 23 of their 25 Champions League seasons (D2), including each of their last nine in a row since a 2-2 draw with Milan in 2011-12.
- Only Ryan Giggs has scored in as many Champions League campaigns as Messi. The Manchester United great also scored for his club in 16 seasons at the highest level in Europe, but, unlike in Messi’s case, they were not consecutive campaigns.
- Barcelona became the first team ever to have two goalscorers aged 17 or under in a single Champions League match - Ansu Fati and Pedri.

Both sides are in domestic action at the weekend, with Barca taking on Real Madrid in the first Clasico of the season and Ferencvaros facing Ujpest.