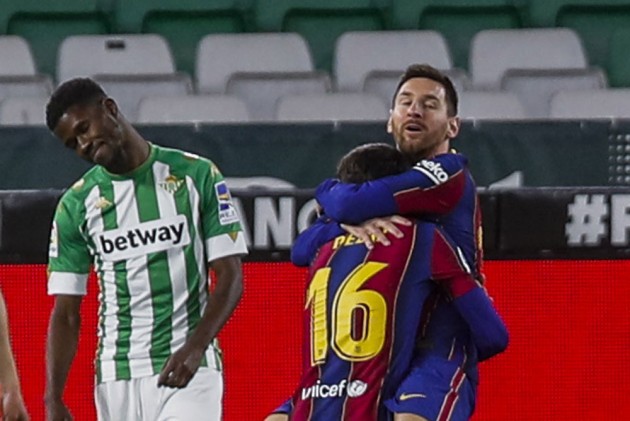 Messi was a shining light for Barcelona after being named among the substitutes, scoring an equaliser before unlocking Betis' defence with a sublime pass on Sunday.

The six-time Ballon d'Or winner scored just 136 seconds following his introduction – his fastest goal as a substitute for Barca in LaLiga.

Trincao struck the 87th-minute winner for Barca, who are seven points adrift of leaders Atletico Madrid, though the latter have two games in hand.

Koeman saluted superstar captain Messi post-match, telling reporters: "I always talk to the players and I express to them my ideas.

136 - Lionel Messi has scored just 136 seconds after coming as a substitute in this match against Betis, his fastest goal as sub for @FCBarcelona in @LaLigaEN. Solution. pic.twitter.com/9QlXz3Cjah

"I spoke to Lionel Messi yesterday about whether he was happy with having a rest and that if we needed him during the game, I was going to bring him on.

"That's what ended up happening. We were losing 1-0 and just a few minutes after coming on to the pitch he completely changed the game.

"He scored the equaliser and then added a lot to our play in the second half."

Messi – tipped to leave Barca amid strong links to Paris Saint-Germain and Manchester City – has scored six goals in his past seven LaLiga games playing from the bench.

Koeman's Barcelona have won their past nine games away from home in all competitions – the third best streak ever for the Spanish giants after 13 in 2008-09 under Pep Guardiola and 10 in 2014-15 under Luis Enrique. Barcelona claimed LaLiga, Copa del Rey and the Champions League in those seasons.