Early in his second tenure as Barcelona president, Joan Laporta has promised "to carry out a renovation" this off-season 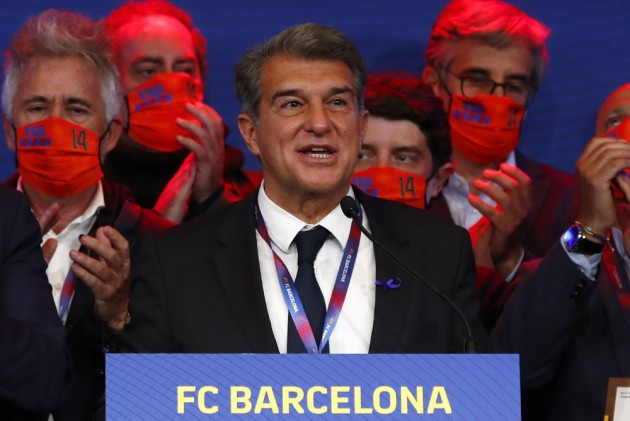 Barcelona president Joan Laporta said a cycle has finished for the LaLiga giants and he wants to "carry out a renovation" after an underwhelming 2020-21 campaign. (More Football News)

Barca have fallen off the pace late in the LaLiga title race and will likely finish third in Ronald Koeman's first season as head coach at Camp Nou.

Koeman's Barca lifted the Copa del Rey title last month but crashed out of the Champions League in the round of 16 at the hands of Paris Saint-Germain.

"A cycle has finished and we are working to carry out a renovation," Laporta said at the Festa de l'Esport Catala

"We have been eliminated from the Champions League very early and the league has been lost in an incomprehensible way.

"I'm talking about the end of the cycle and renewal because that's what I think needs to be done.

Very happy for receiving the Prize for the best Catalan team awarded to the @FCBfemeni. A recognition to the commitment and persistence of our feminine players, who reached the glory on Sunday. #FestaEsportCat2020 pic.twitter.com/L15zb2iKIi

"Starting next week we are going to make a series of decisions and at that time we will comment.

"Now what we have to do is work hard and effectively to have a very competitive team to win the Champions League and to win the league.

"I already said that when the season is over, I would evaluate the results, the game, the attitude, the mentality and the ambition."

Barcelona last won LaLiga in 2018-19 while they have only reached the Champions League semi-finals once since last lifting the European crown in 2015.