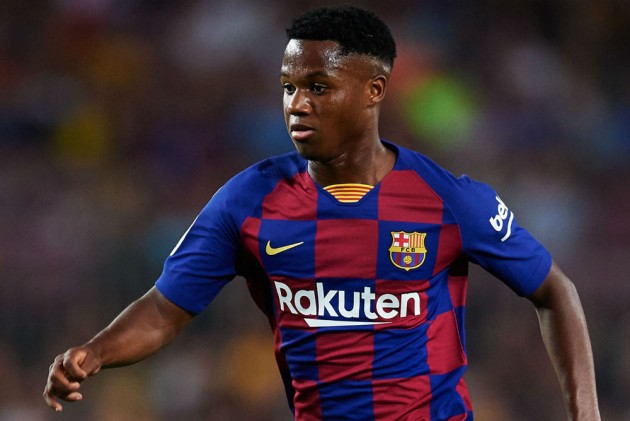 Ansu Fati has signed an improved contract with Barcelona until June 2022, the LaLiga champions have confirmed.

Under the fresh terms, the 17-year-old attacker's release clause is up from €100million to €170m and it will rise to €400m when he signs full-time professional terms.

Fati joined Barca's academy in 2012 and this season became the youngest LaLiga goalscorer in the club's history.

His second-half equaliser during August's 2-2 draw at Osasuna came with him aged 16 years and 304 days.

"For me, La Masia is the best school in the world," said Fati, who is both the youngest player to start a game at Camp Nou and also represent Barcelona in the Champions League.

"They helped me from the first day I arrived and I am extremely grateful to everyone who works there.

"They are all spectacular. From the first day, I have learned things from everyone. And they have also been there to support me through difficult times.

"Working every day with the best is a dream, and also a reward.

"From now onwards, what I have to do is keep working, even harder than ever, to keep getting chances and carry on enjoying myself. The rest will come after."

1 - Ansu Fati (16 years and 321 days) will become the youngest player in Champions League history to play for Barcelona, breaking the record previously held by Bojan (17 years and 22 days). Start. pic.twitter.com/y6AH0YVGiG

Fati, who is also eligible to play for Guinea-Bissau, was granted Spanish citizenship in September – clearing the way for him to represent them at Under-21 level for the first time the following month.

He has two goals in 11 appearances across all competitions in 2019-20, including four starts.