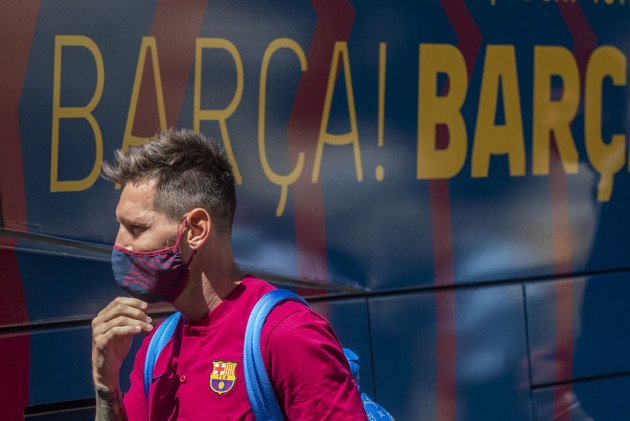 Messi did not feature in Barca's first day of pre-season training under new head coach Ronald Koeman on Monday after the six-time Ballon d'Or winner handed in a transfer request, with Manchester City reportedly the frontrunners for his signature.

As with Sunday's coronavirus testing for members of Koeman's first-team squad, Messi did not attend because he believes a clause in his contract allowing him to leave on a free transfer is now active, meaning he is no longer a Barcelona player.

It comes after Barca were dethroned by bitter rivals Real Madrid in La Liga and humiliated 8-2 by Bayern Munich in the Champions League quarter-finals in 2019-20.

Netherlands international De Jong, who endured a difficult first season in Spain, told NOS: "Currently it's a mess at Barcelona, so many strange things happening. It's chaos.

"I haven't talked to him [Messi] about this myself. Nor the club. So I honestly do not know how it is.

"But if Messi really leaves, it will be a huge blow to the team and the club.

"When I come back after these international matches, I will see what has happened at the club."

These moments, we shall never forget!
Thank you, @ivanrakitic pic.twitter.com/qAzdZHbhno

Messi has called Barca home since 2001, emerging from the club's famed youth system in 2004.

Since making his debut 16 years ago, Messi has won a club-record 33 trophies – including 10 La Liga titles and four Champions League crowns.

De Jong added to Fox Sports: "I hope that Messi is still there when I get back, but that is not something that is up to me. He's still in the group chat.

"I'm not anyone to talk about it with him, I'm sure he has many people around him doing that these days."