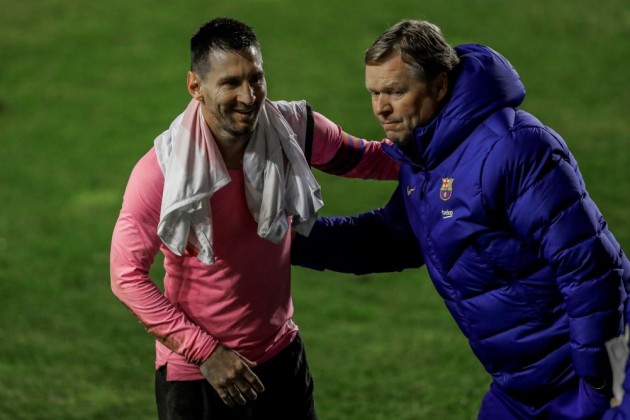 Ronald Koeman needs his whole Barcelona squad playing at their top level alongside Lionel Messi in Saturday's crucial Clasico, while he welcomed the return of Gerard Pique to his squad. (More Football News)

A patchy run of form from Atletico Madrid, in which the leaders in LaLiga have won only four of their past 10 top-flight matches, means Barca are only a point off top spot with Madrid just three back.

Saturday's contest, at Madrid's Estadio Alfredo Di Stefano, could now have a huge bearing on the outcome of the title race in Spain this season.

Messi is the top scorer in El Clasico for all competitions (26) and in LaLiga (18) but has not scored in his previous six encounters against Madrid, matching his longest run without a goal in the fixture.

"Hopefully Messi will be decisive for us tomorrow," Koeman told a pre-match news conference.

Barca's squad for the trip to Madrid has been boosted by the return of veteran centre-back Pique, who has been sidelined for just over a month since spraining his knee in the 3-0 win over Sevilla that secured a comeback 3-2 aggregate win in their Copa del Rey semi-final.

The versatile Sergi Roberto is also included in the squad having been out since February with a thigh issue.

"They are two important players due to their quality and personality," Koeman added.

"They lack rhythm but they are physically well, very excited to help the team, and it is important to have almost all the players available.

"For me, every player has to be in good physical and mental condition, so they all have a chance to play.

"Every player has to prove this, and my role will be to pick the 11 best players to start the match."

Barca have been on a sensational run in LaLiga, going unbeaten in 19 matches and winning 13 out of the past 14.

The last time these sides met, Madrid ran out 3-1 winners at Camp Nou and Los Blancos are aiming for a third straight win in this match for the first time since 1978 and a first LaLiga double since the 2007-08 campaign.

But Koeman insists the outcome of this game will not be decisive in determining the end-of-season outcome at the top of LaLiga.

"The result in principle is not decisive because there are still many games to go and it will be difficult to win every game," Koeman said.

"But it is true that the team that wins will see their morale increased.

"El Clasico is a different game from the others, there is always a lot of emotion. Barca are having a great season, with many points achieved that allows us to fight for La Liga, but Madrid is still Madrid and we have to respect them and be at our best.

"We were better in the first half, but we lost in the second half with the intervention of the VAR. But we have improved in effectiveness."