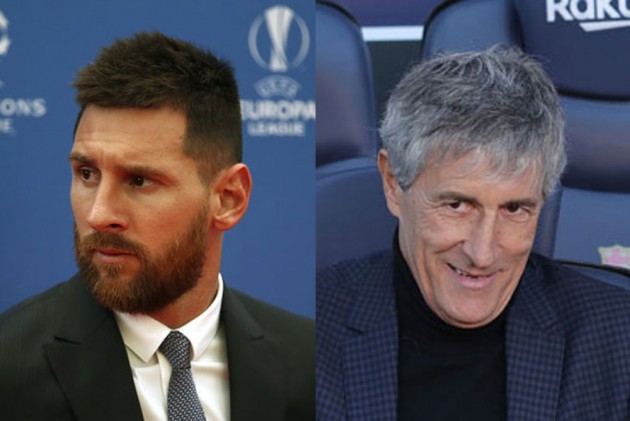 Barcelona head coach Quique Setien insists there are no problems between Lionel Messi and his coaching staff amid reports of behind-the-scenes unrest at Camp Nou. (More Football News)

Barca have struggled for their best form since La Liga's resumption and draws at Sevilla and Celta Vigo – either side of a laboured 1-0 home win over Athletic Bilbao – have handed Real Madrid the initiative in the title race.

Zinedine Zidane's men are two points ahead with six matches remaining, while also holding a superior head-to-head record from this season's Clasico meetings.

Having twice surrendered a lead in their 2-2 draw against Celta last time out, Barca face a tough assignment at home to in-form Atletico Madrid on Tuesday.

Messi was seen apparently ignoring instructions from Setien's number two Eder Sarabia during the drinks break at Balaidos, where heated words were allegedly exchanged in the dressing room after the game.

Speaking at a pre-match news conference for Atleti's visit, Setien insisted Messi and the squad are united in the battle to retain their title.

"In reality it is true that there are always controversies, as in life, and it is normal that there are differences," he said of the Messi-Sarabia incident.

"But this has always happened. I was not an easy player either. What we have to try to do is to convince everyone of the common idea.

"I understand it as something natural. There is good communication. I don't give it any importance."

Setien believes issues being raised within the camp should not be considered a surprise after dropping points in a high-pressure title race.

"When there are no wins and you don't win, everyone gets a point across," he said. "The relationship we have with the staff is good. It is true that at specific moments we do not agree.

"Yesterday we talked about many topics but we focused on the topic of football. We have to improve and do things better.

"The situation we are experiencing, in which we are superior but do not generate goals, frustrates us. But the situations are normal. It is something we can change."

Atletico are on a run of four consecutive victories, having drawn their initial game back after the resumption to the season.

"They are a great team, very easily identified with their way of doing things," Setien added.

"They are going to make things very complicated for us. Winning is a tremendously decisive question because anything can happen but every time the matches are reduced and the margin [in the title race] is less.

"We give due importance to this game as to others."