Quique Setien endured some tough outings during his time in charge of Barcelona, which is now over 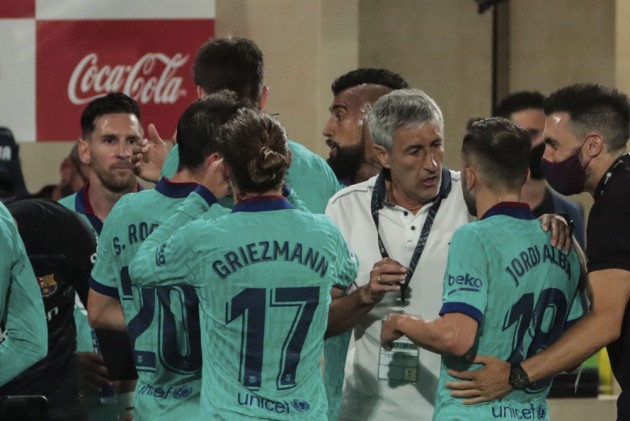 The writing was on the wall for Quique Setien's short Barcelona tenure after their embarrassing 8-2 defeat to Bayern Munich in the Champions League quarter-finals. (More Football News)

Setien was only appointed to the Blaugrana's dugout in January to replace the sacked Ernesto Valverde but a disappointing stint, in which Barca also lost their title in LaLiga to Real Madrid, has come to an end.

The Bayern capitulation was an ugly bookend, of course, but it was not the only disappointment for Setien and Barca over the course of the past seven months.

Here, we take a look at the matches that suggested Setien was out of his depth at Camp Nou.

A 2-0 defeat to Valencia almost two weeks prior was Barca's first blip from Setien's opening five games in charge, but this Copa del Rey exit was particularly poorly timed, given Lionel Messi had criticised director of football Eric Abidal over comments in which he suggested several players had not worked hard enough underneath Setien's predecessor. Messi himself missed a great chance before Sergio Busquets was credited with an own goal from Ibai Gomez's inswinging cross towards Inaki Williams in the 93rd minute.

READ: Koeman To Replace Setien As Next Barcelona Manager - Reports

Barca recovered with three straight wins and a 1-1 draw at Napoli in the first leg of their last-16 Champions League tie to head into a crucial Clasico in decent form. But in a pulsating fixture, Madrid ended a seven-match winless league run against their fierce rivals thanks to second-half goals from Vinicius Jr and Mariano Diaz. It saw Barca relinquish their grip on top spot and, even though they would return to the summit prior to LaLiga's suspension for the coronavirus pandemic, it was a worrying outing for Setien.

Barca did actually show an improvement from a goalless draw with Sevilla and a laboured win over Athletic prior to this clash, however the old frailties were on display. Luis Suarez scored twice but Fedor Smolov equalised on the first occasion before Iago Aspas curled in an 88th-minute free-kick to snatch a point. Nolito missed a golden opportunity to completely turn the match on its head even after that. The result opened the door for Madrid, who did not look back.

In the penultimate round of games in LaLiga, Barca relinquished their title to Madrid in insipid fashion. Messi's outstanding free-kick levelled proceedings after Jose Arnaiz's opener, but Roberto Torres earned all three points in stoppage time for Osasuna, who had earlier seen Enric Gallego sent off. It brought an end to a 30-game unbeaten league run at Camp Nou for Barca and led Messi to say the team needed to "take a long, hard look at ourselves".

Setien's only realistic hope of keeping his job was winning the Champions League. Instead, what occurred was utter humiliation in Lisbon. Thomas Muller scored twice, while Ivan Perisic and Serge Gnabry were on target as Barca conceded four goals in the opening half of a Champions League match for the first time. Goals from Joshua Kimmich and Robert Lewandowski made matters worse and the salt was truly rubbed in Barca's wounds when Philippe Coutinho added a late brace against his parent club.

Your favourite goal vs Barca? pic.twitter.com/P1mJXnSNdW