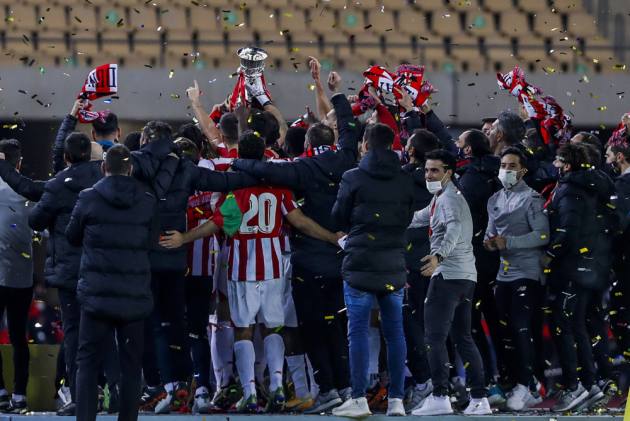 Lionel Messi was sent off for the first time in his Barcelona career after Inaki Williams scored a sublime goal that gave Athletic Bilbao a shock 3-2 win in the Supercopa de Espana final. (More Football News)

The Catalan giants were on the brink of a record-extending 13th triumph in the competition after Antoine Griezmann scored twice, either side of Oscar De Marcos' equaliser, to put Barcelona 2-1 up late on in normal time.

But Athletic, who knocked out holders Real Madrid in the semi-finals, equalised through substitute Asier Villalibre in the 90th minute and Williams scored early on in the additional period to turn the tie on its head.

Captain Messi was then dramatically sent off in the dying moments of extra time when VAR spotted an off-the-ball incident involving Villalibre, as the Argentinian violently knocked the Athletic player to the ground.

1 - After 753 appearances in all competitions, Lionel Messi has been sent off in a game for Barcelona for the first time. Red.

Barca were seeking their silverware under Ronald Koeman but it proved to be a night they would want to quickly forget.

Marc-Andre ter Stegen palmed Ander Capa's long-range drive over the crossbar from the game's first short on target as Athletic threatened after 26 minutes.

Barca slowly found their rhythm and took the lead through their first meaningful attack, Griezmann drilling home after Messi's shot from a Jordi Alba cutback was blocked.

It took Athletic just a minute and 33 seconds to respond through De Marcos, who ghosted in to guide Williams' impressive pass over the top away from Ter Stegen.

And Garcia thought he had given his side the lead just before the hour mark, only for his header to be rightly ruled out for offside following a VAR check.

Athletic lost 3-2 to Barca when the sides met in LaLiga less than two weeks ago but they continued to look the more threatening as Williams blazed wide from inside the box.

Koeman's men appeared to have won the game in normal time when Alba again got in behind and teed up Griezmann to steer home, yet there was to be a late twist.

Captain Iker Muniain sent a free-kick into the box and Villalibre, having kept himself just onside, fired past Ter Stegen to salvage an additional 30 minutes.

Williams' moment of magic arrived three minutes into extra time as he cut inside Oscar Mingueza and curled the ball away from Ter Stegen into the top-right corner.

Barca had time to take the game to penalties but Griezmann volleyed wide at the back post from the best of their remaining chances.

What does it mean? Opportunity missed for Koeman

This competition may be fourth on the list of Barcelona's priorities this season, but Koeman targeted victory in this four-team tournament to strengthen his claims that the club are on the right track under his stewardship.

Having won four in a row in all competitions, including a penalty shoot-out victory over Real Sociedad in the semi-finals, they entered this match with momentum on their side and as heavy favourites.

Athletic may be 13 points below their opponents in LaLiga but they more than held their own in this final, outshooting their opponents 12-10 over the 120 minutes and showing a little extra cutting edge when it mattered most. The Messi red card was an alarming blight on an already desperately disappointing night for Barcelona.

Antoine at it again

Griezmann scored from two of his five shots and has now been directly involved in seven goals in four games, having failed to score or assist in his previous seven outings.

He has also scored five goals in the last four finals he has played for club and country - two for Atletico Madrid, one for France and now two for Barcelona.

In what was his 753rd appearance for Barcelona in all competitions, Messi was shown his first red card for an off-the-ball swing at Villalibre.

Even before that incident it was a frustrating day for the Argentina international on his return from a short lay-off as he failed to find the target from any of his three attempts.

Barcelona switch focus to the Copa del Rey on Thursday with a trip to Cornella, though that last-32 tie could be in doubt due to reports of a coronavirus outbreak in the opposition's camp.

Athletic are up against lower-league opposition on the same day, too, as they take on Ibiza for a place in the last 16.