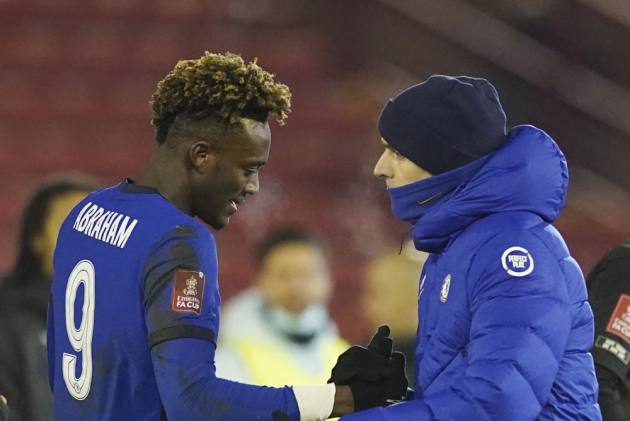 Tammy Abraham scored his 12th goal of the season as Chelsea beat Barnsley 1-0 to reach the quarter-finals of the FA Cup. (More Football News)

Abraham tucked in his first goal of the Thomas Tuchel era in the second half and also headed off the line at the other end as the Blues knocked the Championship side out at Oakwell.

A young, fit Barnsley team gave a great account of themselves on a cold night in South Yorkshire, but it is Chelsea who will play Sheffield United in the last eight.

Chelsea have now won four and drawn one of their five games under Tuchel after he replaced Frank Lampard as head coach last month, and although they were not at their best, a much-changed Blues side had enough to edge through.

9 - Tammy Abraham has been directly involved in nine goals in his last seven starts in the FA Cup (6 goals, 3 assists), with his strike tonight coming from Chelsea's first shot on target in the match. Opener. #BARCHE

Callum Brittain missed a golden opportunity to put the Tykes in front 10 minutes in when he shot straight at Kepa Arrizabalaga from close range.

Chelsea should have had a penalty when Toby Sibbick caught Abraham before making contact with the ball, only for referee Martin Atkinson to wave play on.

Atkinson was right not to point to the spot following a tangle between Mads Andersen and Abraham, before Brittain's strike looked like it might be heading in, only to deflect wide off team-mate Victor Adeboyejo late in the first half.

Tuchel replaced Andreas Christensen, who took a knock on the head, and Marcos Alonso, bringing on Antonio Rudiger and Reece James after the break following a somewhat flat first-half display.

Barnsley showed more intensity than Chelsea as they pressed the Blues high up the field, although the visitors' Callum Hudson-Odoi flashed a shot wide after cutting in from the left at pace.

Rudiger then headed Hakim Ziyech's free-kick just wide after 63 minutes, but Abraham broke the deadlock when he tapped in a James cross a minute later, with the hosts feeling the flag should have gone up.

Home substitute Michael Sollbauer almost scored with his first touch, but alert Chelsea striker Abraham headed off the line as Barnsley were unable to force extra-time.

What does it mean? Blues set up Blades clash

Tuchel rang the changes after the win at Sheffield United last weekend and Abraham's goal gave the London club a fourth win in a row. Barnsley made a much better fist of it than when they were thumped 6-0 by Chelsea in the EFL Cup in September, bowing out with their heads held high.

Eight-time FA Cup winners Chelsea, who have conceded only one goal in five games since Tuchel took charge, will play the Blades at Stamford Bridge on the weekend of March 20-21 for a place in the semi-finals.

Abraham up for the cup

That is now four FA Cup goals for Abraham this season and he also prevented Sollbauer equalising, producing a great header over his own crossbar. Abraham netted a hat-trick in the 3-1 fourth-round win over Luton Town, which proved to be the last match of Lampard's reign, and here he accounted for another Championship side just a few weeks later.

He found the back of the net with his only shot of the night and was involved in 24 duels, winning nine of those in the air as he led the line well but lacked service other than from James.

Ziyech fails to make an impact

Big-money signing Ziyech did not look like a man who fancied a cold evening in South Yorkshire.

The winger did not win any of his nine duels and failed to provide a creative spark, showing a lack of quality in the final third before he was replaced by teenager Faustino Anjorin with just over 20 minutes to go.

- From the 1999-2000 season onwards, Chelsea have reached the FA Cup quarter-final stage more times than any other side, with this victory ensuring their 15th appearance in the last eight in that time.

- Barnsley are the first team Chelsea have eliminated from both major domestic cup competitions within a single season since Manchester United in 2012-13, and the first from a lower division since Bolton Wanderers in 1971-72.

- Chelsea have progressed from 53 of their last 55 FA Cup ties against sides from a lower division.

- Chelsea only had one shot on target in the match and Abraham made it count, taking his goal involvements total from his last seven FA Cup starts to nine (6 goals, 3 assists).

- Since the start of last season, Abraham has scored 30 goals for Chelsea across all competitions, at least 11 more than any other player at the club.

- Only Timo Werner (6) has more assists for Chelsea in all competitions this season than full-back James (5).

Chelsea will look to make further strides in the Premier League when they face Newcastle United at home on Monday, while Barnsley return to Championship action at leaders Brentford on Sunday.