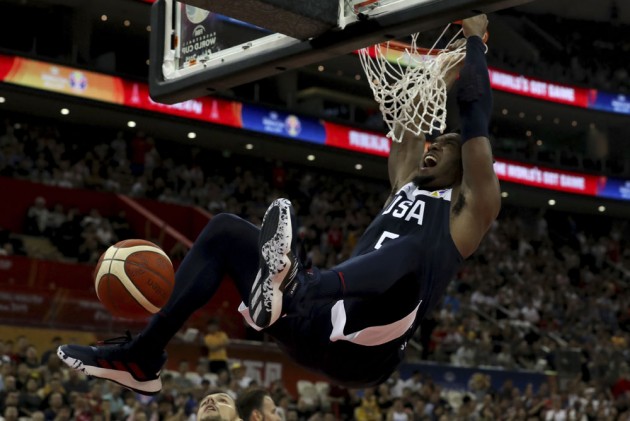 The defending champions were made to work before claiming a comfortable victory in Group E, where there was a win for Turkey over Japan.

New Zealand pushed Brazil close, but lost out in a 102-94 epic, with Giannis Antetokounmpo shining as Greece beat Montenegro.

France edged out Germany by four points and it was equally as close between the Dominican Republic and Jordan, although Lithuania thrashed Senegal 101-47.

USA UP AND RUNNING

USA were sluggish at times in their opener in Shanghai, but the world's best side ultimately had too much for the Czech Republic to cope with.

Chicago Bulls player Tomas Satoransky was bright for the Czechs, but USA had scoring options throughout the side – Donovan Mitchell, Harrison Barnes and Kemba Walker getting into double figures.

Gregg Popovich's side were disciplined in possession, making just seven turnovers, while Walker was the player of the match, adding four assists and a steal to his 13 points.

Australia started their campaign by amassing more than100 points in a World Cup match for the first time since 1990 as the Boomers ran out 108-92 winners over Canada.

Joe Ingles ran the show for Australia, providing 10 assists – the most in a game by an Australian player since assists became part of the box score in 1994.

Matthew Dellavedova lead the way in terms of points, scoring a game-high 24 as Australia made a statement of intent in Group H.

However, the Boomers' win was not enough to earn them top spot, as Lithuania made light work of Senegal.

It finished 78-74 to France – Evan Fournier starring for the winners with a 26-point haul.

Despite going 14-0 down, Germany fought back to keep within touching distance, and even though Fournier gave his country a 76-70 lead with 32.5 seconds remaining, there was still time for a grandstand finish, France just holding firm.

Elsewhere in Group G, the Dominican Republic overcame Jordan 80-76 in a thrilling contest in Shenzhen.

GIANNIS MAKES HIS MARK FOR GREECE

Meanwhile, Antetokounmpo needed just 16 minutes to show his world-class quality as the NBA star turned on the style to help Greece beat Montenegro.

Antetokounmpo netted 10 points and clocked up eight rebounds in the 85-60 victory in Group F.

Brazil are second in the group, after coming out on top against New Zealand.

The Tall Blacks mounted a late charge following a third-quarter blitz from Brazil but could not muster enough to complete the comeback.