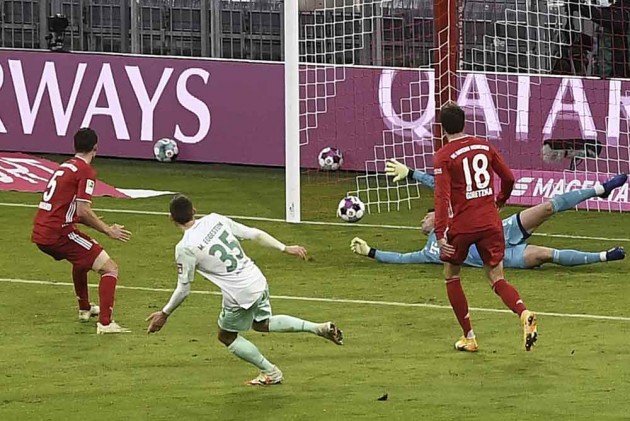 Bayern Munich dropped points for just the second time this season as they were held to a 1-1 draw by Werder Bremen on Saturday. (More Football News)

Maximilian Eggestein's well-worked goal gave the visitors a deserved lead late in the first half before the champions struck back through Kingsley Coman after the hour.

But they were unable to build on their equaliser as a dogged performance from Florian Kohfeldt's men earned a deserved share of the spoils.

Werder travelled to the Allianz Arena having avoided defeat in their previous four outings, though each of those ended in draws.

And, with Bayern having earned 10 consecutive victories coming into this fixture, they would've expected to dominate from the off, rather than give up the best of the first-half chances.

However, only a brilliant Manuel Neuer save denied Josh Sargent from close range early on, before Leonardo Bittencourt volleyed into the side-netting when he might have done better.

The hosts' rhythm was no doubt damaged by the early loss of Theo Hernandez to injury, a blow that saw Leon Goretzka introduced and both Javi Martinez and David Alaba change position.

Werder capitalised on that uncertainty at the back as Sargent burst in behind down the flank being marshalled by Martinez and Alaba, before pulling back for Eggestein to sidefoot home just before half-time.

Milot Rashica should've made it two shortly after the restart, taking too long in a one-on-one situation, prompting Douglas Costa to respond by cracking the bar with a deflected effort.

That marked the start of a spell of long overdue Bayern pressure that finally told when Coman headed in Goretzka's right-wing cross at the back post.

But, despite the introduction of Leroy Sane and Serge Gnabry off the bench, Hansi Flick's men struggled to create much of note in the final half-hour.

In fact, only another fine one-handed stop from Neuer prevented the visitors from snatching the win through Sargent with five minutes of normal time remaining.

Bayern's grip on top spot in the Bundesliga has been loosened by dropped points, with RB Leipzig now able to draw level if they beat Eintracht Frankfurt later on Saturday

Werder, meanwhile, remain in mid-table thanks to a fifth consecutive stalemate.

Any team that stops Bayern Munich winning at home is going to need to defend well and Werder certainly did that, with Marco Friedl arguably the pick of the back three.

The Austrian led his team on tackles (four), clearances (nine) and interceptions (three) to help ensure Robert Lewandowski failed to score in a Bundesliga match for the first time this season.

David Alaba's life was perhaps not made any easier by an early move from centre-back to left-back but the defender still fell short of his usual standards.

He won just 33 per cent of his duels, made no tackles or interceptions, and lost possession 20 times - more than any other Bayern player.

Bayern return to Champions League action on Wednesday when they host Salzburg, while Bremen's next Bundesliga outing is away at Wolfsburg on Friday.