Bayern Munich will be able to claim the Bundesliga title this weekend after going 10 points clear of RB Leipzig with four games to go. 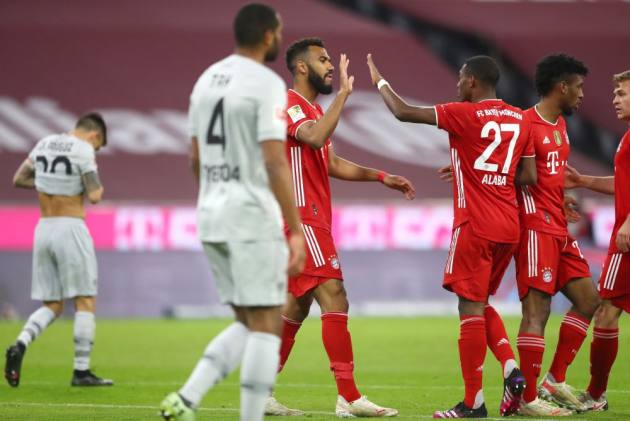 Eric Maxim Choupo-Moting and Joshua Kimmich gave Bayern Munich a 2-0 win over Bayer Leverkusen and put them on the brink of a ninth consecutive Bundesliga title. (More Football News)

They did so with the minimum of fuss after Choupo-Moting – again deputising for the injury Robert Lewandowski – opened the scoring in the seventh minute.

A superb second from Kimmich made a response from Leverkusen deeply unlikely, as their struggles during the second half of this season were again laid bare at the Allianz Arena. Hannes Wolf's side are seven points behind four-placed Wolfsburg having played a game more.

Former Schalke and Stoke City forward Choupo-Moting has been much maligned during his stints at Paris Saint-Germain and Bayern, but the striker now has four goals in his past five appearances and smashed home from close range via a deflection off Sven Bender after Thomas Muller's effort was saved.

3 – Eric Maxim Choupo-Moting has scored in three consecutive games in all competitions for the second time in his career (before in March 2014). Run. #FCBB04 | @FCBayernEN pic.twitter.com/ctIHIer3iC

Once again, Kimmich oozed class in midfield and Leverkusen goalkeeper Lukas Hradecky had no chance when the Germany international let fly form the edge of the box in the 13th minute.

Patrik Schick darted in behind Bayern's high line but could only entertain Manuel Neuer with a routine save, while Hradecky fumbled at the other end when Kimmich tried his luck again.

Leverkusen's number one sharply denied David Alaba before the break but Choupo-Moting rolled a clever finish past him in the 65th minute, only to be denied by a marginal offside call.

Leroy Sane, introduced from the bench with a point to prove, lashed over with 20 minutes remaining.

Another flying winger, Leon Bailey, almost helped to bring Leverkusen back into the contest when his cross was hit into the turf and against the crossbar by substitute Karim Bellarabi.

That prompted something approaching a rally from the visitors, although not one to sufficiently discomfort Bayern as they cantered towards the finish line and another domestic title.

What does it mean? Bayern on cloud nine

Any faint hopes Leipzig had of dethroning the Bundesliga's dominant force effectively ended before a ball was kicked in Munich and the outgoing Flick will be able to enjoy an extended victory lap after a trying couple of weeks. Like Cologne, Bayern's weekend opponents Mainz are also fighting for survival, but expect glory to be sealed by the Rhine on Saturday.

Kimmich turns in another masterclass

Once a utility defender, Kimmich is now the go-to man in central midfield for club and country and it is easy to see why. The 26-year-old's third Bundesliga goal of the season crowned a display where he was at the heart of everything for Flick's side. No Bayern player made more than his 44 passes in the opposition half, nor attempted (10) or completed (three) more crosses. Kimmich's four shots was also unsurpassed by anyone in the Bayern side, although Alaba matched that total.

- Bayern lead the Bundesliga with 71 points after 30 games. In Bundesliga history, it has only happened on 11 occasions that a team has reached at least 70 points from 30 games - Bayern doing this 10 times and Borussia Dortmund once. Dortmund (71 points in 2015-16) are the only team to post such a haul yet fail to finish as champions.
- Bayern scored in a 31st consecutive Bundesliga home game against Leverkusen. This is their second longest scoring run against an opponent at home after Hamburg (39 games of an ongoing run).
- For the second time in his professional career, Choupo-Moting has scored in three consecutive matches in all competitions. The first time was in March 2014 for Mainz.

Mainz represent the next and possibly final hurdle for Bayern on their title quest. Leverkusen could feel pangs of what might have been when they host in-form Eintracht Frankfurt, who are nine points better off and seemingly Champions League bound.