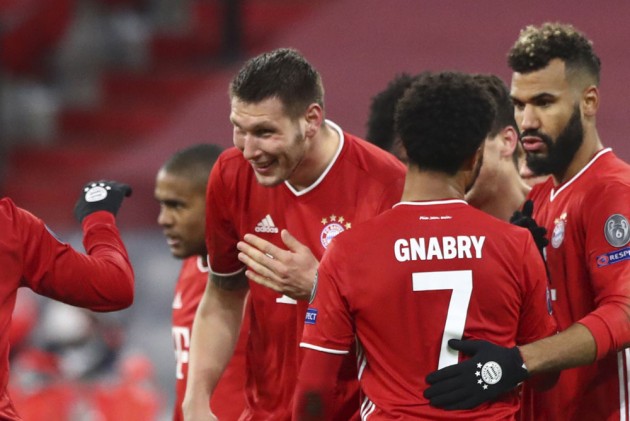 Bayern Munich won all of their home games in the Champions League group stage for the second straight season as they saw off Lokomotiv Moscow 2-0 on Wednesday. (More Football News)

With top spot in Group A already ensured for the holders heading into the encounter in Munich, Hansi Flick's side had little pressure on their shoulders.

A toothless first-half display paved the way for a much-improved performance after the break as Niklas Sule's towering header and an excellent finish from Eric Maxim Choupo-Moting saw Bayern return to winning ways after drawing with Atletico Madrid last week.

Flick has now won 13 of his 14 Champions League matches in charge of Bayern, who have shown little let up following their triumphant campaign last term.

Bayern enjoyed 69.1 per cent possession in the first half, though their dominance only resulted in one attempt on target.

It came in the 30th minute, with Douglas Costa drilling straight at Lokomotiv goalkeeper Guilherme.

Maciej Rybus and Francois Kamano went close against the run of play, before Thomas Muller sliced just wide at the other end.

Serge Gnabry was introduced at half-time and the winger almost set up an opener within five minutes, with Sule's header from his team-mate's corner kept out by Guilherme.

Gnabry met Kingsley Coman's cross and, despite diving in the opposite direction, Guilherme made a supreme save with his feet before Bayern's number seven thumped wide on the rebound.

Lokomotiv's resolve was finally broken in the 63rd minute, though, with Sule meeting Costa's corner and directing a brilliant header beyond Guilherme.

Gnabry saw another stinging effort saved with 10 minutes remaining, but Lokomotiv failed to clear their lines and were punished when Choupo-Moting slammed home his first Champions League goal for Bayern.

What does it mean? Bayern dominant, no consolation prize for Lokomotiv

The visitors needed to snatch a win against Bayern to have any chance of clinching a Europa League spot ahead of Salzburg, who went down to Atletico Madrid.

Bayern scored 24 goals in last season's group stage - trailing Paris Saint-Germain's competition record by just one – and though this term's tally of 17 represents a drop-off, the Bundesliga champions have again been in supreme form throughout, with a 4-0 win over Atleti in October a highlight.

Bayern, who amassed 22 attempts in total, needed more pace and urgency to their play for the second half and Gnabry certainly provided that.

After replacing Muller at the break, the former Arsenal forward created a joint-game-high three chances – along with Costa and Bouna Sarr – including a fine assist for Choupo-Moting's goal.

Lokomotiv's goalkeeper was always likely to be busy on Wednesday, but Guilherme certainly did himself proud.

His save from Gnabry's strike was of the highest quality, and in total the 34-year-old tallied up five saves, with both of Bayern's goals down to individual excellence, rather than an error on his part.

Bundesliga leaders Bayern travel to Union Berlin on Saturday, while Lokomotiv are in Russian Premier League action at Krasnodar a day later.