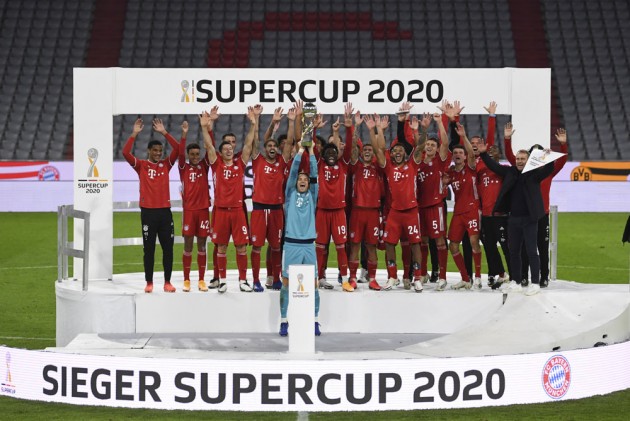 The midfield general in the mighty Bayern machine won the ball in the centre circle and bundled in after exchanging passes with Robert Lewandowski for the 82nd-minute clincher.

Corentin Tolisso and Thomas Muller had earlier put Bayern 2-0 in front, but Julian Brandt and Erling Haaland brought Dortmund back to level terms.

Bayern dominated the early stages, Kimmich seeing a header saved, before their opening goal came on a breakaway after a Dortmund corner.

Alphonso Davies shifted the ball away from danger to Kingsley Coman ahead of him on the left, with Muller's pass then releasing Robert Lewandowski, whose low cross from the right was struck firmly at goal by Tolisso.

Marwin Hitz got enough on the ball to turn it against the crossbar, but it bounced down and Tolisso bundled over the line for the 18th-minute breakthrough.

It was 2-0 to Bayern in the 32nd minute when Davies hoisted a cross from the left to the far post and Muller powered in a header off the right post.

It looked like a night where Bayern may produce a statement result and performance, but then they lost their way. Brandt was clinical after Benjamin Pavard gave away the ball, with slick passing freeing the Dortmund forward to rifle powerfully past Neuer for a 39th-minute goal that changed the momentum.

Haaland grabbed a leveller in the 55th minute when Thomas Delaney played him in and the striker buried a terrific finish past Neuer, who four minutes later parried a thumping effort to deny the Norway international a second.

Bayern needed a slice of fortune for the winner. Delaney lost the ball near the halfway line and Kimmich was quick to pounce, feeding Lewandowski and continuing his run to receive the return pass.

His initial shot was pushed out but, despite being down on the turf, Kimmich managed to get a foot to the ball and prod it into the back of the net as Dortmund defenders converged.

What does it mean? - Bayern's appetite for silverware remains

Like the Community Shield in England, it is dangerous to read too much into the outcome of games such as this. If Dortmund were serious about winning this trophy, they would not have substituted Haaland midway through the second half.

He was flying at that stage, looking ripe to score again, but the feeling on the Dortmund bench appeared to be that he would be better saved for Bundesliga duty. Bayern, if there are any conclusions to be drawn, showed they still have that hunger, even after sweeping the board last season.

Kimmich's winner was all about desire, and Bayern have a bucketful of that.

Delaney's goal role at both ends

The pass from Delaney that teed up Haaland to equalise was threaded through beautifully, so it was unfortunate that the Danish midfielder should make a costly late mistake.

Being mugged by Kimmich on halfway and seeing the ball hit the back of the net moments later was tough to take.

Delaney did most of his duties well and played more passes (24) in the Bayern half than anyone else in black and yellow, but one slip and the good work was all but forgotten.

A wonder goal from Kimmich won the Klassiker for Bayern in May, and effectively ended the Bundesliga title race. His Supercup winner was not a thing of equivalent beauty but it was due reward for a player who kept trying his luck.

He had five shots in Wednesday’s game, more than any player on the pitch. Dortmund only had seven shots as a team, but they were pushing for a winner until Kimmich's latest decisive intervention.

Bayern are back in Bundesliga action when they welcome Hertha Berlin on Sunday. Dortmund will have home advantage against Freiburg on Saturday.