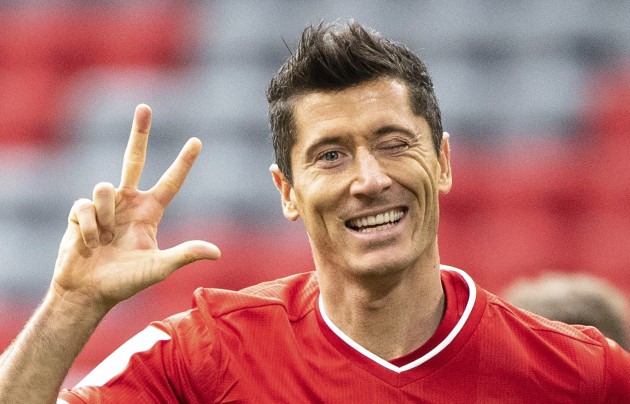 Robert Lewandowski hit a hat-trick before Leroy Sane struck the goal of the game as Bayern Munich thumped Eintracht Frankfurt 5-0 in the Bundesliga. (MORE FOOTBALL NEWS)

In the latest instalment of his one-sided battle with defenders in the German top flight, it was a familiar story as Lewandowski came out on top, taking his haul to a startling 10 goals in five matches this season.

That is a Bundesliga record for this stage of the season, and last season's haul of 34 goals must already be in his sights after a perfect hat-trick.

Three days after Bayern beat Atletico Madrid 4-0 in the Champions League - a match in which Lewandowski left the scoring to others - the German champions were again irresistible at their Allianz Arena home. There was even a goal for 17-year-old substitute Jamal Musiala in the closing moments, to cap a fine team performance.

Although Eintracht had their moments, Bayern had Lewandowski. It was 2-0 in the 26th minute with the Poland striker again the scorer, this time producing a deft header from a right-wing corner, connecting near the penalty spot and sending the ball inside the left post.

He could not capitalise on chances to make it a first-half treble but the hat-trick was complete after an hour.

Douglas Costa's throughball was taken neatly in his stride by Lewandowski and, as two defenders converged, he found just enough time to adjust his feet and send a low shot wide of Kevin Trapp and into the right corner.

Bayern suffered an early setback when Alphonso Davies went down off the ball, clutching his ankle. His replacement, Lucas Hernandez, should have made it 4-0 but shot wastefully over from close range after being picked out by Coman.

The fourth soon came though and it was a super strike from Sane, cutting in from the right and curling an unstoppable 25-yard shot past Trapp. Musiala bundled the fifth with the last kick of the match.

Eintracht were on an eight-match unbeaten run heading into this game, including their opening four of this Bundesliga campaign. But against the might of Bayern they were reduced to cannon fodder.

Bayern’s defeat to Hoffenheim four weeks ago could look terribly anomalous this season, because this was another performance that suggested it will be a procession to the title for Hansi Flick’s team.

Five shots, four on target, three goals. Lewandowski makes goalscoring look terribly easy at times. Each finish was immaculate, and on this form, Gerd Muller’s record of 40 goals in a Bundesliga season will come under threat. He only had 31 touches in the entire game, but he is the man with the golden touch.

Eintracht’s back three simply were incapable of getting near enough to the man they knew they had to keep under wraps. Makoto Hasebe, at the heart of the backline, made just two tackles all day, and the way Lewandowski took a mile whenever he was given an inch reflected badly on the defensive unit.

Generous defending is hardly a new phenomenon in this fixture: Bayern had won each of their previous 12 competitive home games against Frankfurt, and by an aggregate 40-7 scoreline.

Bayern are back on Champions League duty as they face Lokomotiv Moscow on Tuesday. Eintracht will welcome Werder Bremen in the Bundesliga next Saturday.